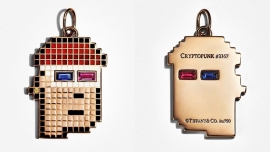 In recent weeks both the Arnault family and Tiffany & Co. have made headlines when it comes to the Metaverse. Days after his father, LVMH chairman Bernard Arnault signaled his wariness of the metaverse "bubble", Alexandre Arnault changed his profile picture on Twitter and Instagram to a Cryptopunk NFT (PFP). Alexandre, who is the executive VP of product and communications at Tiffany & Co., purchased an NFT titled Punk #3167 for ETH 160, roughly USD 415,000.

An NFT profile picture owner often uses the avatar on social media to signify membership in the Web 3.0 community. To commemorate his launch into the CryptoPunk community, Alexandre transformed NFT #3167 into a rose gold-and-enamel pendant. For the 3D glasses, he used baguette-cut sapphire and Mozambique ruby, and a yellow diamond for the earring. The piece was showcased on Twitter and has the Tiffany & Co. brand and NFT number engraved on the back.

During LVMH’s earnings call on 27 January Bernard Arnault said the applications of the metaverse and NFTs "can undoubtedly have a positive impact —if it is well done — on the activity of the brands, but it is not our objective to sell virtual sneakers at €10. We are not interested in that.” He later continued comparing the metaverse to the early 2000s internet boom, stating “Let’s be wary of bubble effects.”

In their latest April Fool’s Day prank, Tiffany & Co. announced the launch of their cryptocurrency - TiffCoin - on Twitter. Holders would be granted exclusive access to product launches, NFT releases, and invite-only events. While subsequent posts revealed that the cryptocurrency aspect was a joke, 499 coins had been minted in 18k gold and were available on their website for 24 hours — at USD 9,999 each.

Although the pendant was a one-off release, it does beg the question to see if this is how the brand intends to bridge the gap between IRL and the metaverse.

In their Let's Get Digital webinar series the Antwerp World Diamond Centre hosted 2 webinars on Web3, Crypto, and NFTs, and how they connect to the diamond industry.
You can find the sessions on awdc.be/webinars.