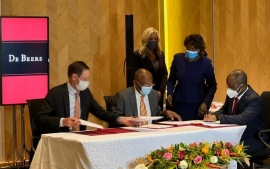 Iconic diamond miner De Beers this week now officially returns to Angola, as the Anglo American diamond mining division signed two mineral investment deals with the State's mining entity Endiama, giving the miner exploration rights for 35 years in the Northeast of the country. Each exploration concession will have a separate joint venture, with the majority of shares held by De Beers, with an option for Endiama to increase it's share. In 2018, Angola initiated a series of reforms, to increase the appetite of foreign investors to tap into the huge potential in regards to diamond mining in the country. De Beers' CEO Bruce Cleaver in a statement applauded the reforms, "Angola has worked hard in recent years to create a stable and attractive exploration in the country, and we are pleased to be returning [after ten years of absence] to active exploration in the country.