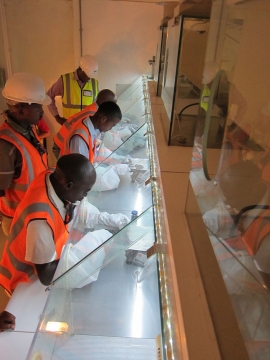 Africa Intelligence reports that Botswana’s President Masisi, speaking at a gala dinner hosted by Lucara Diamonds, is adding pressure to the negotiations with De Beers on a renewed Debswana contract, the 50/50 joint venture between the government and De Beers. In the current agreement, 75 % of Debswana’s rough is sold via De Beers, 25% is sold via the state-owned Okavango Diamond Company, the latter achieving record sales revenue via its sales in Antwerp last year. As the deadline for negotiations is less than three months away, Masisi upped the stakes and praised the vertically integrated business model between Antwerp-based HB Antwerp and Lucara, which generates additional revenue as all parties, including the government, share in the profit from the final polished outcome of Lucara’s rough diamonds. Africa Intelligence reports Masisi “said at the dinner that he no longer wishes to operate under any model other than the one set up by Lucara and HB Antwerp”.