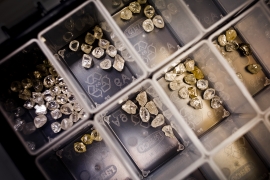 According to Richard Duffy, CEO of mining company Petra Diamonds, the long-predicted supply squeeze is being reflected over all diamond categories. This would mark a structural change in the diamond market, with increasing prices creating a robust and supportive market.

Duffy points out the current strong demand pull into an inventory pipeline where inventories are largely depleted. With a very low ability of suppliers to provide inventory, this will result in higher demand than supply and thus increase prices over the entire value chain.

With the closing of Argyle, Australia is no longer a major supplier. There are fewer mines in production in Canada, which in addition have shorter life expectations. Duffy also added that a number of the large producers in Africa and Russia are transitioning to underground production, which encompasses additional risks. Add to this the reduced exploration spends, and you know chances of discovering a new significant kimberlite pipe are rather far away.

Duffy is backed by the latest Global Diamond Report, issued by AWDC and Bain & Company. According to the report, rough diamond production is continuing its steady decline. Major new projects have not been announced and investments in exploration are limited, so production growth will likely stay at 1% to 2% per year during the next half-decade. Promising demand growth and production scarcity support stability or further price growth for rough diamonds.