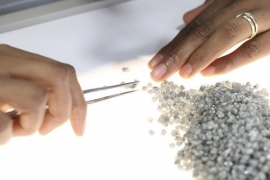 De Beers announced their first sight of the year raised $660 million, a strong increase compared to its revenue at the last December sight, which raised $336 million.

According to Bruce Cleaver, CEO De Beers, buyers are restocking: “As anticipated, there was strong growth in consumer demand for diamond jewelry over the end of year holiday season. As a result, we saw the continuation of robust rough diamond demand in the first sales Cycle of the year as buyers focus on restocking depleted inventories.”