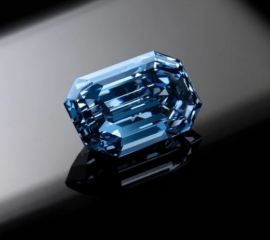 Auction house Sotheby’s announced they will auction ‘The De Beers Cullinan Blue’ - one of the most valuable blue diamonds ever - in April.

The extraordinary 15.10 carat step-cut blue diamond has been cut from an exceptional typeIIb 39.34 carat rough stone, discovered by Petra Diamonds at the Cullinan mine in April 2021 and sold in Antwerp to De Beers and Diacore, for US$40 million or over US$1 million per carat.

The fancy vivid blue stone is internally flawless and the largest of its color to go under the hammer. To date, only five blue diamonds weighing more than 10 carats have come to auction, none of those exceeded 15 carats.

De Beers put a price tag of $48 million on the stone but experts believe that an exceptional blue stone of this quality could achieve a record price in the regions of US$4 million per carat.