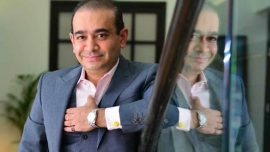 Following a two-year-long legal battle, the British government has approved the extradition of Nirav Modi, 50, who allegedly defrauded Indian state-run Punjab National Bank (PNB) of $2 billion. The extradition order was signed on April 15," a spokesman for the United Kingdom's Home Office said in a statement on Friday.

In February, a district judge ruled that Modi could be extradited to India, dismissing arguments such as his mental health worsening during the pandemic and the conditions of an Indian prison. "I am satisfied that Nirav Modi's extradition to India is in compliance per human rights," District Judge Samuel Goozee said. The judge was satisfied that there was evidence that could lead to a conviction, but that case was a matter for the Indian courts.

Modi was arrested on an extradition warrant on March 19, 2019, and appeared via videolink from Wandsworth Prison in southwest London at the Westminster Magistrates' Court.

Modi can still appeal to a higher court in Britain against the decisions of both the district court and the secretary within 14 days. "The legal team is in the process of challenging the order in the UK High Court, which may happen anytime soon," said Zulfiquar Memon of Indian law firm MZM Legal, who is part of the team representing Modi in his extradition case.