Court Rules: Nirav Modi To Be Extradited To India 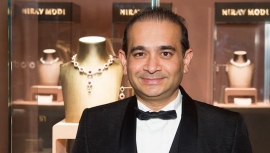 Following a nearly two-year-long legal battle, the UK courts have ruled that Nirav Modi, 49, who allegedly defrauded Indian state-run Punjab National Bank (PNB) of $2 billion, will be extradited to India.

Earlier today a UK judge ruled that Modi can be extradited to India, dismissing arguments such as his mental health worsening during the pandemic and the conditions of an Indian prison. "I am satisfied that Nirav Modi's extradition to India is in compliance per human rights," District Judge Samuel Goozee said.

The Judge is satisfied that there is evidence that could lead to a conviction, but that this was a matter for the Indian courts. Reportedly there are clear links between Nirav Modi and other connivers including bank officials in clearing Letters of Undertaking (LoUs) that facilitated huge unpaid loans. "Mr. Modi personally subsequently wrote to PNB acknowledging the debt and promising to repay. The CBI is investigating that Nirav Modi firms were dummy partners," the judge noted. These companies were shadow companies operated by Nirav Modi, he said. "I do not accept that Nirav Modi was involved in legitimate business. I find no genuine transactions and believe there is a process of dishonesty."

Modi was arrested on an extradition warrant on March 19, 2019, and appeared via videolink from Wandsworth Prison in south-west London at the Westminster Magistrates' Court.

The case will now be sent to UK home secretary Priti Patel, who will take a final call on the extradition. If the extradition is approved, Nirav Modi will have the option to challenge it in the UK high court.