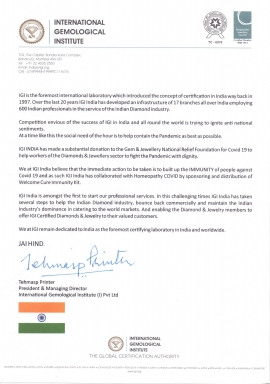 In a response to The Diamond Loupe, the International Gemological Institute (IGI), says to be shocked about a media post that is circulating among diamond trading communities. The visual, a screenshot of which can be viewed here, calls on diamond traders "to boycott China" by not using IGI certificates. In 2018, Chinese conglomerate Fosun acquired an 80% stake in IGI, the Antwerp-based diamond grading lab. In a statement, IGI states that the source of the controversial post is a competing lab in India, and it underscores IGI was one of the first grading labs to expands its business into India, now employing over 600 people in the country across 17 branches. The lab's India branch statement further says that considering the challenges posed by the COVID-19 pandemic, the lab has demonstrated its commitment to the country and the Indian diamond industry by sponsoring several initiatives that can help to curtail the health crisis.

India's government recently blocked several "Chinese" mobile phone apps, following a military stand-off at the Chinese-Indian Border, and the tensions are leading both countries into a trade war.