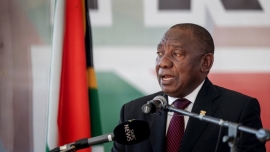 South Africa has joined the list of countries on lockdown to prevent the spread of the COVID-19 coronavirus. It will go into effect on midnight Thursday 26 March to midnight Thursday 16 April. President Cyril Ramaphosa announced the move on Monday night. This will be a massive hit to an economy that is already in recession, and likely to its critical mining industry. To help cushion the blow, he announced interventions, including tax relief and other measures.

"Immediate, swift and extraordinary action is required if we are to avoid human costs of this virus," said Ramaphosa, adding that if the nation failed to act swiftly, it could face "a human catastrophe of enormous proportions." In the week since the country declared a state of national disaster, the number of confirmed cases has increased sixfold, Ramaphosa said, especially troubling in a country with a large immune-suppressed population of HIV and tuberculosis suffers. "The action we are taking now will have lasting economic costs," said Ramaphosa. "But we are sure that the cost of not acting now will be far greater."

The Lockdown Directive requires all non-essential businesses and activities to be suspended, and that people should remain at home. We were first informed of this lastest lockdown by Petra Diamonds, who says it is currently carrying out a detailed review of the Lockdown Directive to comply with the measures required, which will involve placing its mining operations in South Africa on care and maintenance for the duration of the lockdown. The Company will issue a further statement in due course once its review and planning has been completed.

Responding to South Africa's COVID-19 measures, Anglo American Plc., parent company of De Beers, said that it will review the detailed regulations relating to the action, including in relation to exemptions for certain business activities. It will issue a further statement in due course. The company said today that it is working together with the Government of South Africa to ensure the continuity of its business where appropriate in order to minimise any unintended consequences of the announced lockdown.

All shops and businesses will be closed except for pharmacies, supermarkets, petrol stations and health care providers as well as laboratories, banks and other essential financial services. Essential personnel including health care workers, emergency and security personnel necessary to the response will also be exempt. Last week the country prohibited travel from high-risk countries including Italy, Iran, South Korea, Spain, Germany, the United States, the United Kingdom and China.