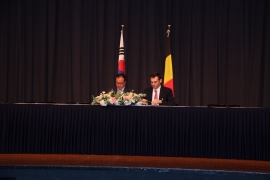 The government of South Korea on December 27, 2019 agreed to eliminate its 5% import tax on loose polished diamonds, effectively opening up the South Korean market to new sources of polished diamonds. Yesterday, the Ministry of Economy and Finance (MOEF) confirmed that Diamond has been designated as a specific good that will be exempted from customs duties pending completion of the final legislative approvals. The abolishment of the import tax is expected to go into effect on April 1.

After years of negotiations, South Korea has agreed to lower the Most Favored Nation import duty to 0% for all countries, establishing a level playing field for diamond imports. This will not only benefit the transparency of South Korea’s trade, but will also add value through the diversification of the country’s market by opening it up to new suppliers and enabling the import of higher-quality diamonds without a tax penalty. The new policy is likely to become law by mid-March and will enter into force on April 1, 2020, increasing competition on the South Korean market, enabling the country’s jewelers to have access to a broader range of high-quality goods and effectively signaling the end of a pervasive black market.

The Diamond Loupe had the opportunity to discuss the new developments with Kim Jong Mok, president of the Korea Jewelry Industry Promotion Foundation, who was instrumental in getting the new legislation passed and is preparing to open the Seoul International Diamond & Gem Exchange in April. First some background information.

In February of 2019, the South Korean government abolished the special 26% Individual Consumption Tax (ICT) on imports of loose polished diamonds exceeding KRW 5,000,000 ($4,460). This was a welcome initiative for jewelers and importers of quality gemstones, but it left in place the 5% import tax and 10% VAT applicable to all imports, which has not been applied uniformly; certain countries, and India in particular, had exemptions.

In 2010, South Korea signed an import agreement exclusively with India that eliminated the 5% tariff on diamonds imported from the manufacturing hub, a move that created a competitive disadvantage for all other countries that supply polished diamonds, such as Belgium. For while the EU and South Korea signed a free trade agreement 2011, an overly strict interpretation of its Rules of Origin framework prevented the majority of European diamonds from enjoying the same zero-duty status when imported to South Korea. The Antwerp diamond industry immediately saw its market share in South Korea decline following this change of policy, as the additional tax burden proved to be too great a barrier in a business where margins are already tight.

In an attempt to rectify the situation, the Antwerp World Diamond Centre (AWDC) went to work on behalf of the Belgian diamond industry, in 2016 joining the City of Antwerp’s Mission to Seoul where the first MoU’s were signed between AWDC and the Korean Jewelry Industry, making clear the desire for Antwerp diamonds on the Korean market. In 2017, the AWDC welcomed a delegation of top Korean jewelry companies for an Antwerp Diamond Experience, which connects interested foreign buyers with Antwerp traders. While interest was high, again, the Korean import tax got in the way of doing business.

Undeterred, in 2019 the AWDC, along with three Antwerp-based diamond companies, established a connection with leading Korean jeweler Golden Dew, which has over 100 retail outlets in the country – holding a competition to develop a new customized diamond cut and launching three collections to reintroduce Antwerp diamonds to South Korea. This special cut and Antwerp-inspired collections were shown to Their Majesties the King and the Queen of Belgium during a State Visit in March of 2019, as AWDC continued to promote Antwerp diamonds in South Korea and conducted further dialogue regarding the import tax issue.

In recent years, Mr. Kim Jong Mok of the Korea Jewelry Industry Promotion Foundation has played an instrumental role in bringing about the elimination of the 5% import tax on polished diamonds. The Diamond Loupe had the opportunity to sit down with him to discuss the changes and what it means for the Korean diamond and jewelry industry.

The Diamond Loupe: As of January 1 2019, South Korea eliminated the 26% Individual Consumption Tax on loose polished diamonds costing more than KRW 5,000,000. As of April 1 2020, it will also eliminate the 5% import tax on diamonds from all countries. What impact do you expect this will have on the jewelry trade?

Kim Jong Mok: The short answer is that Korea's jewelry black market will disappear, so the smuggling practices will change and normal import and export trade will become the norm.

TDL: So, you think it will not only clean up the Korean jewelry sector but will make it more transparent and competitive?

KJM: Of course. Diamond imports to Korea were banned until 1990. This ban was the root cause of smuggling, which has become widespread. Since the import tariffs on polished diamonds are now abolished, it will turn South Korea into a transparent trade market. Soon, transparent trading will be a competitive force.

KJM: I believe they are, for sure. Up until now, South Korean jewelers have only competed on price, not quality. Therefore, low-quality Indian diamonds largely dominate the market. But wealthy consumers in Korea want high-quality diamonds. As a result, these wealthy Korean consumers are buying more international luxury jewelry every year, as our local market cannot meet that demand. If they are going to appeal to consumers, Korean jewelers need new diamonds, and right now, the most interesting source of diamonds for us is Belgium.

TDL: How important are diamonds to South Korea’s jewelry trade in general?

KJM: Yes, very much so. Korean consumers know Belgium is the capital of diamond trading and is highly respected for its craftsmanship. In recent years, AWDC officials have promoted Antwerp diamonds twice in Seoul, including during a Belgian State Visit to South Korea  and the relationship is developing. The AWDC and the KJIPF (Korea Jewelry Industry Promotion Foundation) signed a MOU a few years ago. Belgium also donated one of HRD Antwerp’s high-tech detection devices, the M-Screen, to the KJIPF. So, I would say in general, there has already been a lot of promotion of Belgian diamonds, so they should be ready to take advantage of elimination of the import tax.

TDL: Your organization, the Korea Jewelry Industry Promotion Foundation, played a big role in getting the import tax removed. What new developments are you looking forward to in the next year or two?

KJM: We did play a significant role, because it was a critical issue. South Korea is one of the world's top 10 diamond consumption markets, and soon it will be open to high-quality diamonds and diamond jewelry. I am now trying to create an environment where many high-quality diamonds from Antwerp and elsewhere can be sold in Korea. The plan for doing this is to establish the Seoul International Diamond & Gem Exchange. Our goal is to continue to collaborate with the AWDC and the KJIPF to benefit from the new open market in Korea and create transparent local trading markets.

I truly expect Belgian high-quality diamonds to play a role in developing the Korean diamond market. We hope the new exchange will become a leading partner in the world diamond market, to do this and we will need to not only develop existing partnerships but look to develop new partnerships with leading businesses and organizations.