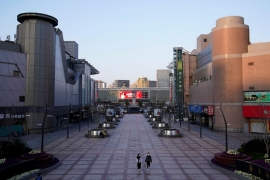 Concern about the impact of the coronavirus on the diamond and jewelry trade is growing, not only in China, but also in the markets that supply China, like Hong Kong and India. Events have been concelled, retail sales have plummeted and the outbreak of the virus in China has already had a ripple effect on diamond supply chains as the death toll passes 1,000. And this is just the tip of the iceberg. As the New York Times lead international story today reads, "more than two weeks after China locked down a major city to stop a dangerous viral outbreak, one of the world’s largest economies remains largely idle. Much of the country was supposed to have reopened by now, but its empty streets, quiet factories and legions of inactive workers suggest that weeks or months could pass" before the gears start turning again.

India's diamond industry in particular is exposed to disruptions in China. It was expecting to see its supplies to China via Hong Kong for the New Year rise as a result of the partial lifting the China-U.S. trade dispute. Instead, China has been in lock-down mode, and the impact is not limited to the Mainland. As the Wall Street Journal writes, Chinese tourists are disappearing from major shopping capitals across the U.S. and Europe as a result of the new coronavirus, and their absence is hurting some of the world’s highest-profile luxury brands. As announced last week, simultaneous trade fairs in Hong Kong scheduled for March were postponed until May, while the Swatch Group has also canceled its 'Time to Move' event in Zurich, scheduled from Feb. 28 to March 2 for retailers and March 4–6 for the press.

It has been reported that in China, spending on watches and jewelry, apparel, accessories and cosmetics are down by more than 60 percent over the Lunar New Year period. Hong Kong's retail sales of jewelry and luxury items limped to the end an abysmal 2019, with December 2019 sales falling nearly 37% short of December 2018 earnings, as the region closed the year more than 22% lower than the year prior. Pandora, citing just one example, has closed nearly a third (70 of 240) of its stores in China as its business in China has ground to a halt. China is the world’s biggest luxury goods market and Pandora makes about 10% of annual sales from Hong Kong, China and its tourists. Pandora chief executive officer Alexander Lacik told Reuters there has been an “unprecedented” drop in business. “As I sit here and watch the Chinese business, it is in a standstill mode." China and Hong Kong represent about 10% of Pandora’s sales.

The story is the same at luxury fashion group Burberry, which told the Financial Times that the sales impact of the coronavirus outbreak in China is more significant than the civil unrest that halved sales in Hong Kong during its last fiscal quarter. The company, which derives about 40% of its revenue from Chinese consumers, said 24 out of its 64 stores in mainland China were closed and the remainder were operating on reduced hours. Footfall was down by up to 80% at the stores which remain open as consumers stayed in their homes, with a similar impact felt in Hong Kong. “It is more serious in Hong Kong than the protests,” said chief financial officer Julie Brown. “This has had even more significant impact on our Hong Kong business.”

According to India's Gems and Jewellery Export Promotion Council (GJEPC), a majority of exports of polished and cut diamonds to China also go via Hong Kong but the coronavirus is hurting consumer demand, resulting in a dip in exports. Diamond companies having offices in Hong Kong and China have asked their staff to return in view of the vacation. Colin Shah of GJEPC said. He added that if the scenario did not change in 2-3 weeks, prices of polished diamonds would not rise and margins could face a squeeze.

As Emili Vesilind writes for JCK, "The virus’ impact on the jewelry industry may be just beginning."