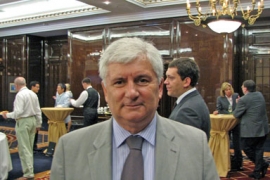 The World Federation of Diamond Bourses (WFDB) mourns the passing away of Sergey Oulin on December 31, 2019 at the age of 69 years. President Ernie Blom has, on behalf of the entire organisation, expressed sadness at the loss of a colleague and friend. Oulin was the president of the Diamond Chamber of Russia and former member of the WFDB executive committee (ExCo).

Blom said: “Sergey Oulin was a long-standing colleague at the WFDB and a member of its Executive Committee. He contributed immensely to the growth of the international diamond industry through the years he was associated with the industry, particularly in his role as the Vice Chairman of the World Diamond Council (WDC) during the early days of the Kimberley Process.” Mr. Oulin was closely associated with the diamond industry in Russia for nearly two decades, holding many different positions of responsibility in industry bodies both within the country and internationally. “Sergey played a key role in developing the system of checks and balances that ensured that conflict diamonds did not enter the diamond pipeline, and was closely associated with the establishment of the KP mechanism within his country,” Blom added.

After graduating from the Moscow State Institute of International Relations (MGIMO) under the USSR Ministry of Foreign Affairs and then working at the Committee of Youth Organizations of the USSR, he took the position of Deputy Chief of the State Repository for Precious Metals and Gems (Gokhran of Russia) in 1990, which eventually led him to the country's diamond industry. In 1992, Sergey Oulin became a Deputy Director of the Production and Coordination Center of Yakutalmaz and in 1995 he was appointed Vice President of ALROSA, where he worked until 2010. In 1996, he was elected President of the Diamond Chamber of Russia. Mr. Oulin published a number of works on the economics of the diamond industry and conflict diamonds in reputed Russian and foreign publications. Blom said: “His association with the diamond industry ended in 2014, but he always remained a close friend.”