Jewels Stolen from Dresden Museum Offered For Sale in Israel 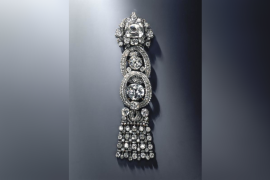 Two of the pieces of jewelry stolen in a November heist at the Royal Palace in Dresden, Germany, are said to be up for sale, according to an Israeli security firm. Individuals claiming to have two sets of jewels from Dresden's Green Vault - the Dresden White Diamond and the breast star of the Polish Order of the White Eagle - offered both items for 9 million euros (10 million dollars) in a series of emails, said Zvika Nave, chief executive of the CGI Group.

The company says it has been contracted to investigate the museum's security measures and the break-in itself, which generated international headlines when it occurred last year. Two thieves broke into the Green Vault, which houses one of Europe's oldest and best-preserved collections of treasures, via a barred window in the early hours of November 25 and used an axe to access display cases in the jewel room. The Dresden White Diamond and the Polish Order of the White Eagle were among over two dozen items stolen in the robbery, which lasted a matter of minutes. The burglars seem to have precisely targeted a glass display cabinet, containing the priceless pieces, including three sets of diamonds featuring brilliant-cut diamonds, whihh were part of an 18th-century jewelry collection. The value of the stolen goods, which some claim could run up to US$1 billion

CGI said the supposed robbers had demanded payment in Bitcoin. "All information was shared in real time with Dresden state prosecutors," Nave said. The senders of the email said that the messages were not trackable due to various encryption techniques.