Thieves Make Off with Priceless Jewels in Spectacular Dresden Heist 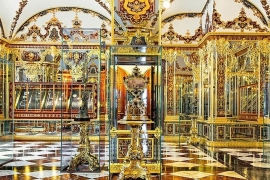 In a spectacular robbery on monday morning thieves broke into the Royal Palace in Dresden, Germany, stealing over a hundred pieces of Baroque jewelry from the so-called the Grüne Gewölbe (Green Vault). According to the authorities, the robbers smashed in a window to gain access after starting a fire that disabled the security system. They seem to have precisely targeted a glass display cabinet, containing the priceless pieces, including three sets of diamonds, including brilliant-cut diamonds, part of an 18th-century jewelry collection. The value of the stolen goods, which some claim could run up to US$1 billion, but is, according to museum director Marion Ackermann, immeasurable.

Fortunately, one of the museum’s most precious objects, the rare natural green, 41ct Dresden Green Diamond, is currently part of an exhibition at the New York Metropolitan Museum of Art.