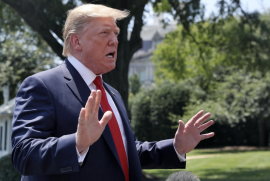 President Donald Trump said Thursday that the U.S. is putting 10% tariffs on another $300 billion worth of Chinese goods, effective Sept. 1. This means that starting at the beginning of next month, every single good coming into the U.S. from China, except those with exemptions, will be subject to an import tax. Called the 'tranche four' tariffs, the list includes rough and polished diamonds (whether or not worked), loose 'synthetic ... precious or semiprecious stones' whether rough or cut and 'suitable for use in the manufacture of jewelry' coming into the U.S. from China. Expectations are that the imposition of tariffs on this list of goods will have an immediate and palpable effect on all consumer goods coming from China.

The new tariff is obviously a concern to retailers, but as diamond industry and retail analyst Edahn Golan commented on Twitter, "polished diamond imports from China to the US were just $233 million in 2018. From a diamond industry perspective, that's not much. US diamond imports from the top 5 sources were $22.4 billion. Imports from India alone neared $9 billion." Loose diamonds, however, are not really the issue, he suggests. Rather, jewelry imports are much more significant. "They totaled $2.1 billion in 2018," Golan writes. "This is where the threat to the industry exists." He adds, "At the same time, jewelry imports from China are shrinking, declining 17.4% over the last 3 years. The decline is not about Trump or politics. It's about a change in demand, cost of labor, quality, and design. And therein lies the solution."

While Trump has said the tariffs will only be 10%, the China Section 301-Tariff Actions proposed list leaves the possibility open to raise them to 25%. “The U.S. will start, on September 1st, putting a small additional Tariff of 10% on the remaining 300 Billion Dollars of goods and products coming from China into our Country,” says Trump in a tweet. The surprise tariff announcement came after the U.S. and China restarted trade talks in Shanghai this week, the first in-person trade talks since a G-20 truce. The White House said Wednesday before this Trump tweet that the meetings were “constructive,” adding that China confirmed its commitment to increase purchases of U.S. agricultural exports. Trade negotiations will continue in Washington in early September, according to the White House statement.

The National Retail Federation (NRF) is concerned. "Retailers have done everything they can up to now, but when we get to 25 percent on this final fourth tranche, if we go there … It’s going to be difficult for any retailer in the country to avoid passing along price increases to consumers," said NRF President Matthew Shay. Executives on earnings calls have warned about the effects of tranche four tariffs on their businesses, noting the potential for eroding margins and higher costs being passed on to consumers. The NRF said previously that tariffs at 25% would be "too large" for retailers to absorb, though it did not specify at the time how 10% tariffs would affect retailers.

Yesterday, the NRF issued a statement from Senior Vice President for Government Relations David French in response to the Trump administration’s escalation of the China tariffs: “As we’ve said repeatedly, we support the administration’s goal of restructuring the U.S.-China trade relationship. But we are disappointed the administration is doubling-down on a flawed tariff strategy that is already slowing U.S. economic growth, creating uncertainty and discouraging investment. These additional tariffs will only threaten U.S. jobs and raise costs for American families on everyday goods," they write. “The tariffs imposed over the past year haven’t worked, and there’s no evidence another tax increase on American businesses and consumers will yield new results. We urge the administration to bring our allies to the table and find new tools beyond tariffs to achieve better trade relations.”