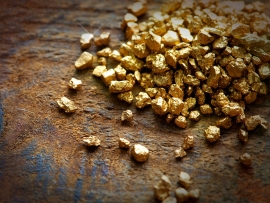 The gold price reached a six-year high on Friday, June 21, hitting $1,410 at its peak as investors sought a safe haven in amid troubled global waters and announcements by the European Central Bank and the Federal Reserve saying they are leaving the door open to interest-rate cuts this year. A lower interest rate in combination with a weakening dollar has historically always made gold an interesting investment. Now that bonds are yielding less, equities seem to have reached an apex and raw materials and currencies are now worth less, gold has become more attractive.

While gold reached a new high, the only thing surprising about it to Georgette Boels, Coordinator Special Metals Strategy at ABN Amro’s Economic Office, is the pace at which it is rising. The bank had anticipated that gold would hit $1,400 per ounce by the end of the year, “We have already reached it in June.” She expects the gold price to reach $1,500 next year. Once the gold price passed the $1,300 limit and then went above $1,350, many investors realized that it contained more value. The trade dispute between the US and China has certainly contributed to this.” The recent tensions between the US and Iran have played a role more recently.

While the precious metal offers investors neither dividends nor interest, it has historically proven to hold its value during difficult times, in comparison to other investment categories. The central banks of China, Switzerland and Russia have been buying more gold for years, but China and India are now the major purchasers and consumers - far more so than in the US.