Sotheby’s Will Be Back In Private Hands After $3.7 Billion Deal 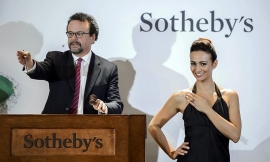 Telecom billionaire and art collector Patrick Drahi has emerged as the winning bidder for Sotheby's, the 275-year-old auction house, which will be going private after agreeing to a $3.7 billion deal. The takeover will result in Sotheby's, the world's oldest and largest international auction house, ending its three decades as a public company, trading on the New York Stock Exchange.

"After more than 30 years as a public company, the time is right for Sotheby's to return to private ownership to continue on a path of growth and success," Domenico De Sole, chairman of the Sotheby's board of directors, said in a statement about the sale. De Sole said the board "enthusiastically supports" Drahi's offer, which would pay shareholders $57 in cash per share. The offer price represents a premium of 61% to Sotheby’s closing price on June 14 and a 56.3% premium to the company’s 30 trading-day volume weighted average share price, Sotheby's said. Drahi is the billionaire who founded the Dutch-based telecom giant Altice empire, which owns Virgin Mobile and several French media houses, including BFM news channel and Liberation newspaper. The transaction is expected to close in the fourth quarter, pending shareholder approval.

The New York Times notes that in recent years, the competition between the world’s two largest auction houses, Sotheby’s and Christie’s, "has seemed at times like a bit of an unfair fight." Christie’s has belonged to a holding company owned by the French billionaire François-Henri Pinault since 1998, who has opened the purse strings for several headline-grabbing consignments. This move is seen as an attempt by Sotheby’s to level the playing field. “This acquisition will provide Sotheby’s with the opportunity to accelerate the successful program of growth initiatives of the past several years in a more flexible private environment,” Tad Smith, the chief executive of Sotheby’s, said in a statement.

"Flexibility is something Sotheby’s has sorely lacked," write Scott Reyburn, Michael J. de la Merced and Robin Pogrebin for the NYT. "As a publicly traded company, it has had to justify every business decision and explain every market fluctuation to shareholders on a quarterly basis. That is a challenge for a business that relies on seasonal revenue and is strongly dependent on the quality of consignments in any given sale." Sotheby’s had $6.4 billion in total sales last year, fueled in part by a 37 percent increase in private transactions. It had a net income of $108.6 million, down from $118.8 million the previous year. Christie’s had $7 billion in total sales in 2018. As a private company, it does not report profits or losses. In 2018, Sotheby’s sold $414 million in jewelry worldwide, as well as $88.5 million in watches.