Dubai The Leading Hub for Billions in Smuggled African Gold 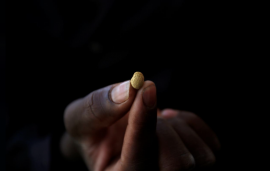 Billions of dollars’ worth of gold is being smuggled out of Africa every year through the United Arab Emirates, a Reuters analysis has found. In a devastating exclusive report (and video), authors David Lewis, Ryan McNeill and Zandi Shabalala write that customs data shows the UAE imported $15.1 billion worth of gold from Africa in 2016, more than any other country and up from $1.3 billion in 2006, but much of the gold was not recorded in the exports of African states. Five trade economists they interviewed said this indicates large amounts of gold are leaving Africa with no taxes being paid to the states that produce them. One can only speculate if the same can be said for the UAE's diamond trade.

Reuters assessed the volume of the illicit trade by comparing total imports into the UAE with the exports declared by African states. Industrial mining firms in Africa told Reuters they did not send their gold to the UAE – indicating that its gold imports from Africa come from other, informal sources - the artisanal or small-scale miners. African governments such as Ghana, Tanzania and Zambia complain that gold is now being illegally produced and smuggled out of their countries on a vast scale, sometimes by criminal operations, and often at a high human and environmental cost. Not everyone in the chain is breaking the law, the authors write. Miners, some of them working legally, typically sell the gold to middlemen. The middlemen either fly the gold out directly or trade it across Africa’s porous borders, obscuring its origins before couriers carry it out of the continent, often in hand luggage.

The customs data provided by governments to Comtrade, a United Nations database, shows the UAE has been a prime destination for gold from many African states for some years. In 2015, China – the world’s biggest gold consumer – imported more gold from Africa than the UAE. But during 2016, the latest year for which data is available, the UAE imported almost double the value taken by China. Most of the gold is traded in Dubai, home to the UAE’s gold industry. “There is a lot of gold leaving Africa without being captured in our records,” said Frank Mugyenyi, a senior adviser on industrial development at the African Union who set up the organization’s minerals unit. “UAE is cashing in on the unregulated environment in Africa.”

The authors note that not all the discrepancies in the data analyzed by Reuters necessarily point to African-mined gold being smuggled out through the UAE. But in 11 cases, the per-kilo value that the UAE declared importing is significantly higher than that recorded by the exporting country. This, said Leonce Ndikumana, an economist who has studied capital flows in Africa, is a “classic case of export under-invoicing” to reduce taxes. Over the last decade, gold from Africa has become increasingly important for Dubai. From 2006 to 2016, the share of African gold in UAE’s reported gold imports increased from 18 percent to nearly 50 percent, Comtrade data showed. The UAE’s main commodity marketplace, the Dubai Multi-Commodities Centre (DMCC), calls itself on its website “your gateway to global trade.” Trading in gold accounts for nearly one-fifth of UAE’s GDP. However, no big industrial companies reached by Reuters – including AngloGold Ashanti, Sibanye-Stillwater and Gold Fields – say they send gold there, mainly because no UAE refineries are accredited by the London Bullion Market Association (LBMA), the standard-setter for the industry in Western markets.