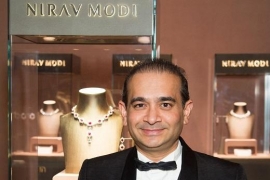 Nirav Modi, who allegedly defrauded Indian state-run Punjab National Bank (PNB) of $2 billion, was arrested and denied bail by a London judge who said there were "substantial risks" that the celebrity jeweler could flee while the country seeks his extradition. Modi was arrested in central London on Tuesday evening on behalf of Indian authorities who want to extradite him to face charges.

India had asked Britain in August to extradite Modi, one of the main suspects charged in the two-billion-dollar loan fraud at PNB, India's biggest banking fraud. Interpol had issued a red notice for the arrest of the celebrated diamond jeweler last July. PNB, India's second-largest state-run bank, in 2018 said that two jewelry groups headed by Modi and his uncle Mehul Choksi had defrauded it by raising credit from other Indian banks using illegal guarantees issued by rogue PNB staff. Modi, a third-generation diamond trader who has dressed stars including actors Kate Winslet, Dakota Johnson and Priyanka Chopra, was part of a CEO-meeting with Indian Prime Minister Narendra Modi on January 23 on the sidelines of the World Economic Forum in Davos. He is worth $1.73bn according to Forbes, placing him 85th on India's wealthiest citizen list. Modi and Choksi, who have both denied wrongdoing, left India before the details of the fraud became public.