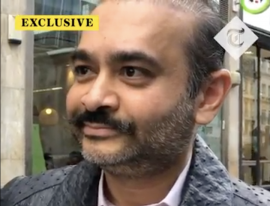 UK newspaper The Telegraph found India's most wanted man, Nirav Modi, openly walking the streets of London, allegedly living in an £8 million ($10.4 million) apartment in London’s West End and apparetly running another diamond business. Nirav Modi fled India last year after becoming a suspect in the biggest banking fraud in the country’s history. A diamond jeweller whose designs have been worn by Hollywood stars, Modi went on the run after being accused of defrauding the Punjab National Bank of roughly $2 billion. Interpol issued a notice last July for Modi’s arrest but he has continued to remain at large, and India has apparently demanded that he to be sent back for prosecution.

The whereabouts of the billionaire diamond tycoon are said to known by British authorities months ago. India first asked for the return of Modi in the summer amid reports he had fled to the UK after being accused of embezzling. The Times of India writes that British Home Secretary Sajid Javid has submitted New Delhi’s request for extradition of Modi, and Indian Ministry of External Affairs spokesperson Raveesh Kuma told reporters last week that, “All necessary steps are being taken for the extradition of Nirav Modi. We have been aware of his presence in UK. It [extradition request] is under their [British government] consideration." Separately, Modi is being sued in the California for defrauding $4.2 million dollars from a Los Angeles entrepreneur; in October 2018, Modi sold two custom diamond engagement rings to Alfonso that turned out to be sythetics.