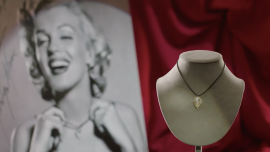 The 24-carat pear-shaped, fancy yellow Moon of Baroda diamond famed for its association with Marilyn Monroe sold for $1.3 million at the Christie’s Hong Kong jewelry auction on Tuesday, easily beating estimates of $500,000 to $750,000. Marilyn Monroe wore the to promote the release of the Howard Hawk’s 1953 film, Gentlemen Prefer Blondes, the film where she famously sang “Diamonds Are a Girl’s Best Friend.” The Moon of Boroda had a long, albeit vague history prior to finding its way to Marilyn, with the Gemological Institute of America having determined that this historic diamond was mined in the legendary Golconda mines of India. Christie’s said the diamond was likely mined there between the 15th and 17th centuries.

It is believed that it was among the vast collection of the Gaekwads of Baroda, princes of one of India’s most ancient and powerful ruling families. It was later gifted to Maria Theresa of Austria, the Habsburg Dynasty’s only female monarch, but was returned to the Gaekwads after her death in 1780. According to the 3 July 1953 edition of the Cleveland News, the Moon of Baroda was acquired in 1944 by Samuel H. Deutsch, the president of a distinguished firm of diamond cutters in Cleveland, Ohio. He sold it in 1953 to Meyer Rosenbaum, president of Meyer Jewelry Company in Detroit, Michigan, the same year this extraordinary coloured diamond came to be associated with Marilyn Monroe. In 1990, the diamond was offered at Christie’s in New York, realising $297,000 — nearly tripling its low estimate. Eighteen years later, in 2008, it was seen in public for the first time in years when it was shown at the Diamond Divas exhibition in Antwerp.

Headlining the auction was an exceptional necklace set with 21 Kashmir sapphires, carrying a total of 109.08 carats from 10.56 to 3.02 carats, and 23 cushion-shaped diamonds from 4.05 to 1.03 carats, weighing a total of 50.63 carats, which sold for about US$14.9 million (HK$ 116,537,500). The pre-sale estimate was US$12,000,000-15,000,000. Of the largest sapphire in the suite, at an astonishing 10.56 carats, Christie's jewelry specialist Vickie Sek said, "To find one stone of such quality is very difficult. The 109 carats in this one necklace took more than 100 years to assemble." The history of ‘The Peacock Necklace’ begins in 1881, when a landslide in the Zanskar range of the northwestern Himalayas first revealed sapphire-bearing rocks. The majority of the world’s most beautiful and highest-valued sapphires were mined from the region, including the present stones. By 1887, Kashmir’s first sapphire mine had been exhausted and production ceased. As a result, gem-quality Kashmir sapphires are now extremely rare.