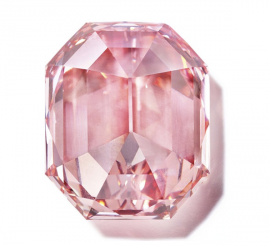 Christie's has announced that the 18.96-carat Pink Legacy – the largest and finest Fancy Vivid Pink diamond the auctioneer has ever put on the block – will be offered for sale at their Magnificent Jewels auction in Geneva on 13 November. With an estimated price of $30 million to $50 million, it has the potential to break the record price per carat for its color category. That record is currently held by ‘The Pink Promise’, an oval-shaped Fancy Vivid Pink diamond of just under 15 carats, which Christie's sold in Hong Kong last year for $32,480,500 - an incredible $2,175,519 per carat. To break this record, the Pink Legacy will have to sell for about $41.3 million.

The Type IIa rectangular-cut diamond, formerly belonging to the Oppenheimer family, is of exceptional purity and color ('vivid' is the highest rating for a diamond’s color). "The saturation, the intensity of this stone is as good as it gets in a coloured diamond," states Rahul Kadakia, International Head of Jewellery at Christie's. "To find a diamond of this size with this colour is pretty much unreal," he continues. "You may see this colour in a pink diamond of less than one carat. But this is almost 19 carats and it’s as pink as can be. It’s unbelievable." Gemologists classify diamonds into two main ‘types’ - Type I and Type II. The latter type has a particularly rare, almost homogenous colour. "Pink diamonds fall under the rare Type IIa category of diamonds. These are stones that have little if any trace of nitrogen, and make up less than two per cent of all gem diamonds. Type IIa stones are some of the most chemically pure diamonds often with exceptional transparency and brilliance."

Christie's explains that in the Fancy Vivid Pink (FVP) range, diamonds of more than five or six carats are rarely encountered. Fewer than 10 percent of pink diamonds weigh more than one-fifth of a carat. In the saleroom, FVP diamonds over 10 carats are virtually unheard of - in over 250 years of auction history at Christie’s, only four such stones have ever appeared for sale. While The Pink Legacy could surpass The Pink Promise for highest value on per-carat basis for FVP diamond, it is not expected to approach the most expensive FVP diamond ever sold, an honor that belongs to The Pink Star: a 59.60-carat oval mixed-cut FVP Internally Flawless diamond, which Sotheby's sold for $71.2 million on April 4 2017. The record for the highest price per carat ever paid for a diamond belongs to the 14.62-carat “Oppenheimer Blue,” the largest fancy vivid blue diamond ever offered at auction, which sold for more than $57.5 million, or $3.9 million per carat.