FTC Drops 'Natural' From Definition of Diamond, A Win for Lab-Grown Producers 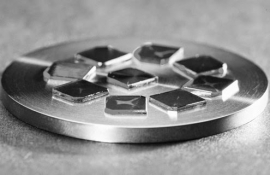 In what can only be described as a victory for laboratory-grown diamond producers, the US Federal Trade Commission (FTC) has dropped the word 'natural' from its definition of a diamond, essentially redefining 'diamond' to include non-mined gemstones, as part its new guides for the jewelry industry. It further gives additional leeway to existing standards regarding the description of lab-grown diamonds (and metal alloys), and has dropped 'synthetic' as an appropriate descriptor of lab-grown diamonds except under certain circumstances. "The revision makes relatively far-reaching changes in what’s allowed as far as marketing lab-grown diamonds," writes JCK's Rob Bates, "and these changes almost entirely tilt toward the lab-grown sector." And yet, despite this decision, the FTC continues to restrict the use of the word “diamond’ to natural diamonds unless the word is immediately preceded by a word or phrase that clearly discloses the product is not a mined diamond.

According to section § 23.12 of the Guides for the Jewelry, Precious Metals, and Pewter Industries, "Definition and misuse of the word ‘'diamond'," the FTC writes: "A diamond is a mineral consisting essentially of pure carbon crystallized in the isometric system", whereas it previously read "natural mineral". "The Commision," reads the Guide, "no longer defines a “diamond” by using the term “natural” because it is no longer accurate to define diamonds as “natural” when it is now possible to create products that have essentially the same optical, physical, and chemical properties as mined diamonds." Later in the explanation of its changes, the commission describes why it sided with Diamond Foundry: "Diamond Foundry asked that the Commission remove “natural” from the diamond definition. It contended, “[t]he fact that diamonds exist in the soil of Earth” is “not a necessary attribute.” In its analysis, "The Commission agrees. The final Guides therefore eliminate the word “natural” from the diamond definition. When the Commission first used this definition in 1956, there was only one type of diamond product on the market – natural stones mined from the earth. Since then, technological advances have made it possible to create diamonds in a laboratory. These stones have essentially the same optical, physical, and chemical properties as mined diamonds. Thus, they are diamonds."

But then, in § 23.25 (a), the FTC states: “It is unfair or deceptive to use the unqualified words ‘‘ruby,’’ ‘‘sapphire,’’ ‘‘emerald,’’ ‘‘topaz,’’ or the name of any other precious or semi-precious stone [such as "diamond", -Ed.] to describe any product that is not in fact a mined stone of the type described.” In other words, as Rapaport News today (July 27) pointed out; "All synthetic diamonds and colored stones must be clearly disclosed. The word diamond cannot be used for synthetic diamonds without words immediately preceding indicating it is not a natural diamond. The word diamond alone without a qualifier can only be used for natural diamonds." Rapaport argues tha these guidelines create confusion by expanding the definition of the word ‘diamond’ to include synthetic diamonds, while continuing to restrict the use of the word “diamond’ to natural diamonds unless the word is immediately preceded by a word or phrase that clearly discloses the product is not a mined diamond. The Rapaport Group has stated that the current FTC guidelines should be modified because they create confusion.

In addition to this fundamental change to the definition of 'diamond', the FTC has opened the door to a much wider range of discriptors for lab-grown diamonds, provided they are not confusing for consumers. The Guides details its consideration of "cultured diamonds" according to the issues presented by the International Grown Diamond Association (IDMA) and Diamond Foundry on the one hand, and the Diamond Producers Association and Jewelers Vigilance Committee on the other. While the former did not get all it asked for (such as restricting the use of "ethical" or "conflict-free" diamonds to those from countries adhering to US labor standards), they tilted the balance in their favor. As Rob Bates points out, "In the past, the Guides listed the following approved descriptors for non-mined diamonds: laboratory-created, laboratory-grown, [manufacturer-name]-created, and synthetic. The new Guides still recommend the first three descriptions - though they no longer include synthetic. They also say that manufacturers can use other phrases if those terms “clearly and conspicuously convey that the product is not a mined stone.” And while adjectives such as created, grown and foundry are not recommended as descriptors, the commission says if the “suggested terms could be used non-deceptively in context (e.g., as part of an ad highlighting that the product is man-made), there is nothing to prevent marketers from doing so.”

As for using the word "cultured" to describe non-mined stones, the commission said it should be qualified, as the term on its own often leads consumers to believe a diamond is mined. The commission suggests marketers use words such as “man-made,” “lab-grown” or “foundry” to qualify “cultured,” thereby avoiding confusion about a diamond’s origins. However, marketers should not use the word “synthetic” to qualify “cultured,” the FTC noted, as it creates confusion among consumers, who believe the term indicates a stone is fake or artificial. Yet the commission goes even a step further in loosening its guidance on the use of 'cultured': While it still recommends against using the term cultured on its own, it now says that cultured can be used even if not immediately preceded by one of the approved descriptors.

Several commenters cited in the report, however, stated that the commission’s proposed guidance is inconsistent with international standards, which ban even the qualified use of “cultured” to describe synthetic diamonds. For example, a standard adopted by the International Organization for Standardization (ISO) in 2015 prohibits using “cultured” and “cultivated” to describe synthetic diamonds, and requires sellers to describe such products as “synthetic,” “laboratory-grown,” or “laboratory-created.” The JVC contended that the purpose of the ISO standard is “fully aligned” with the FTC Jewelry Guides. The fact that the FTC decided otherwise points to a rift between the new American standards and international ISO standards (a not uncommon rift nowadays). While the FTC removed 'synthetic' from its suggested descriptors, it declined to prohibit its use (another request by diamond growers), arguing that the term is not deceptive in every instance. But it did rule that it is misleading to use the term synthetic to “suggest a competitor’s lab-grown diamond is not an actual diamond.”

The changes, approved unanimously by the five-member commission, cap a six-year process of revamping the much-talked-about standards for marketing jewelry and gems. This revision marks the Guides’ first major overhaul in 22 years.