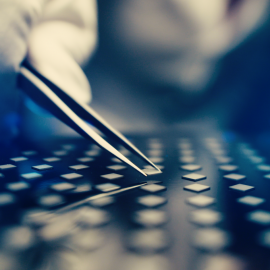 “We are not planning to change our strategy, integrate in the new market (synthetic product market) and launch our own synthetic production, or sell lab-grown diamonds. It is obvious that ALROSA as a diamond producer and one of the founders of Diamond Producers Association (DPA) hopes that this initiative will lead to differentiation of diamonds and synthetic stones, underlining the status of synthetics as a distinct low-price product. However, we can’t deny that there is a chance that it will increase the demand for synthetic stones and cause the devaluation of a diamond as a notion.” Sergey Ivanov, CEO - ALROSA, quoted by Interfax news agency.

“Apart from the disruptive nature of the move in a separate category, it changes nothing for an increasing need to position and secure diamonds as an unique and exceptional store of value. It remains to be seen how far and wide this ‘disruption’ will impact the industry and all those involved." Stephane Fischler – Acting President of the World Diamond Council, by request.

“The DPA has always been clear that more fair and transparent practices need to be adopted by synthetic diamond producers. We are very confident that Element Six will set a new standard in disclosure and marketing of synthetic diamonds, which will in the end benefit consumers and bring much needed clarity to this new category. It is clear from the Lightbox positioning that they will market synthetic diamonds for what they are – low cost pretty stones and not for what they are not – real diamonds, rare, precious and inherently valuable.” Jean-Marc Lieberherr, CEO - Diamond Producers Association (DPA) press release.

“As a long-time employee of De Beers and being Nicky Oppenheimer’s first Personal Assistant when he was executive chairman of De Beers, I was initially taken aback as superficially this seemed to contradict the ‘Real is Rare’ heart of the De Beers business model. However, on greater reflection, the synthetic stones are still small and bridal clients will be able to make their choice when buying the 1ct traditional sizes and this is no different to for example pearls. Moreover, De Beers are well placed to focus at the top end of the (natural) diamond market where synthetics do not play. In summary, it is a smart move and may well remove many players from synthetics producers.” James AH Campbell, Managing Director - Botswana Diamonds plc, by request.

“De Beers' decision to enter this market segment is not necessarily bad news. By defining LGDs as belonging to what we can broadly name the fashion jewelry market segment, we're finally seeing how the market is differentiating between diamonds and LGDs. Differentiation also means different pricing. I expect - and note that I am not the only one who has been contending this for quite a while now - that the price difference between diamonds and LGDs will continue to widen, to the benefit of diamonds.” Ronny Verlinden - President of International Diamond Manufacturers Association, open letter to industry.

“De Beers are fighting the lab-grown (LG) producers by using an age-old Silicon Valley approach - disruption. They are disrupting the disrupters. The strategy behind it is very interesting. From a marketing perspective [emphasizing design, taking 4Cs out of the equation & simple pricing] this is devilishly clever. It provides a fashion item at a very reasonable cost. But it does not end there, because it certainly turns the LG discussion on its head – no longer is the price of the diamond attached to naturals … It will set the record straight by creating differentiation, and that makes perfect sense. Many of the LG producers are ‘incidental’ producers focused on producing industrial goods. Others, fully focused on gem-quality LG, will need to rethink their strategy: lower prices and offer a value proposition that will make them attractive.” Edahn Golan, independent analyst, from his blog - “Lightbox: Disrupting the Disruptors and Evolving.”

"This new initiative could be seen as De Beers embracing the doctrine of self-cannibalization. Says Harvard Business Review: 'Forward-looking incumbents recognize the need to cannibalize their own products, rather than leaving it to other startups, who are more than happy to take on the challenge.' … But it would be truly shocking… if De Beers ever sold lab-grown bridal. Engagement rings are the heart of the diamond business. So even though De Beers doesn’t like it when lab-grown companies target the engagement market, this may force them to do so more than ever … That’s not the only risk. Lightbox could potentially hurt the market for low-end Indian goods, which are mostly used in fashion price-point items … Lightbox also gives the lab-grown category a lot more industry cred … De Beers’ announcement may give lab-grown diamonds the final push toward complete industry acceptance. But that’s just bowing to the inevitable. It was headed that way anyway … De Beers’ decision to start a lab-grown line is, all in all, a fascinating, bold, though clearly risky development. The thinking seems to be, 'if you can’t kill it, join it.'" Rob Bates - JCK News Director, from his article, “With New Lab-Grown Line, Is De Beers Embracing Self-Cannibalization?”

“This was a move to stop the lab-created industry in its tracks and take over control. I think this is the biggest industry news since De Beers moved its offices from London to Gaborone.” Paul Zimnisky - Independent analyst and author of Paul Zimnisky Diamond Analytics, by request.

"If De Beers succeeds in undermining the efforts of the lab-grown producers’ intent on piggybacking their product on naturals and consumer interest in a simple, fun product, they will succeed in changing the discussion around lab-grown altogether. If De Beers succeeds in this mission ... they will have performed a great service for the entire diamond industry. They will be serving their colleagues, diamond miners such as ALROSA, Rio Tinto, Dominion and Petra will, and they will serve the midstream of the diamond pipeline, the manufacturers and polished diamond traders, by helping them all protect their core business – selling polished diamonds and diamond jewelry to consumers who appreciate them and their rarity, and are therefore willing to pay what they are worth.

On the downside, there are possible negative outcomes. For example, a general degradation in the position of natural diamonds. If in the minds of consumers, lab-grown are already attached enough to natural diamonds, then a reduction in the price of lab-grown may influence consumer willingness to pay full price for natural diamonds." Ehud Arye Laniado from his article, "De Beers Shakes Industry Foundations Lab-Grown Initiative"