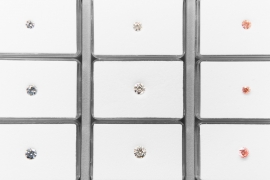 De Beers this morning dropped a bomb on the diamond jewelry world with the announcement that they are launching a new brand of fashion jewelery containing laboratory-grown diamonds (LGDs). Called Lightbox Jewelry, the new brand will offer consumers LGDs in high quality designs for casual, everyday occasions at lower prices than existing LGD offerings. "Lightbox will bring something entirely new and innovative to LGDs, by combining colour and sparkle in fashion jewellery, and at very accessible retail prices", the miner writes in a document sent to stakeholders.

The move, which some might label the "Evil Empire Strikes Again", is a bold and likely brilliant one for the diamond miner on the leading edge of diamond provence tracking, which aims to position them as a dominant player on the synthetic diamond jewelry market. First, it will clarify LGDs as a product and bring transparency to their value proposition - two burning issues that have consumed the diamond trade this past year. Then it will set about undercutting their competitor's prices by about 75%. Diamonds made by companies like Diamond Foundry in the United States and New Diamond Technology of Russia usually cost 30 to 40 percent less than their natural counterparts, prices nowhere near as cheap as the ones from Lightbox. By separating laboratory-grown and natural goods in their own product line, giving them their own distinct price-points and target audience, De Beers potentially achieved in one swift stroke the differentiation between goods the industry has been advocating.

Lightbox, which De Beers will introduce today (May 29), is a fashion jewelry label selling (relatively) low-budget gems with mass-market appeal. (Think a sweet 16 gift, not an engagement ring.) Pastel pink, white and baby-blue lab-grown studs and pendants, priced from $200 for a quarter carat to $800 for one carat, will be presented in candy-colored cardboard gift boxes and initially sold directly to consumers via e-commerce, writes the NYT based on a document released early today. As De Beers writes in the document, "Lightbox is underpinned by extensive consumer research that shows consumers see LGDs as pretty, fun products that are most appealing in fashion jewellery and at a price in line with other products in this part of the jewellery sector."

Toeing the Diamond Producers Association party line, they add, "The research also clearly demonstrated that consumers felt LGDs were least appropriate for meaningful occasions, so we see an opportunity to develop a commercially successful business in the fashion jewellery category that will be marketed in a manner that reflects the different value propositions for LGDs and diamonds, as well as the different consumer perceptions of them." However, we have to wonder if everyone in the industry will concur De Beers' assertion that, "The launch will therefore also support the prospects for the diamond sector as it will help address existing consumer misperceptions about both diamonds and LGDs."

Due to be available to US consumers starting in September this year through the Lightbox website, the line will incorporate a select range of earrings and necklaces initially, with prices retailing from $200 for a quarter carat, up to $800 for a carat (plus a small jewellery setting cost on top of this). It will include pink and blue LGDs, bringing something fresh and innovative to the LGD space. They add, "While Lightbox will be a small business in comparison to our core diamond business, it will play an important role in bringing something new to the LGD offering to consumers and bring clarity to an area that many find confusing." The idea, write Elizabeth Paton and Vanessa Friedman, "would have been unthinkable even two years ago, when De Beers was part of the “Real Is Rare” campaign to combat the promotion of synthetic stones as alternatives to mined diamonds led by the Diamond Producers Association Campaign." Though man-made stones account for only about 2 percent of the diamond industry’s supply, analysts at Citibank have forecast a possible rise to 10 percent by 2030.

The synthetic stones will be produced by Element Six, the industrial arm of De Beers, which has long been producing synthetic diamonds for products as diverse as tools for oil and gas drillers, high-powered lasers and recently high-tech electronics. Now, the De Beers scientists at Element Six have moved into new territory in recent months as the company sets its sights on a lucrative market it traditionally shunned: the production of synthetic jewelry stones. Despite being a world leader in LGD technology through our Element Six industrial synthetics business, Lightbox will be the first time De Beers Group has used its LGD expertise to develop jewelry products.

The authors write, "As Silicon Valley competitors began to market their synthetics as acceptable, greener choices and price them accordingly, De Beers has decided to take the fight for market share to the laboratory turf. Alongside its high-pressure, high-temperature operations, Element Six is using a newer process known as C.V.D., or chemical vapor deposition, which uses low pressure in a vacuum filled with gases that react to create layers of carbon that gradually consolidate into a single stone. The new method is cheaper and easier to monitor than the older one and hence capable of being scalable as a jewelry business." De Beers CEO Cleaver adds, “Synthetics will never be as big as our natural business, and our investments into the space are dwarfed by those elsewhere. But we have a massive advantage over everyone else, given the know-how and infrastructure provided by Element Six. So it’s something we have decided to be very serious about.” A $94 million plant that De Beers is building in Gresham, Oregon, is expected to generate half a million rough carats a year after its completion in 2020.

Sally Morrison, the head of marketing for Lightbox, said the brand’s products were meant to be viewed by consumers as playful accessories. “Everyone who is in this space is focusing their marketing on the bridal category,” Ms. Morrison said. “And we believe they are missing an incredibly interesting opportunity: the self-purchasing professional and younger woman, the older woman who already has a jewelry collection,” and any woman “who doesn’t want the weight and seriousness of a real diamond for everyday life.” The message is conveyed though packaging that is clearly labeled “laboratory-grown diamonds” and intended to be the opposite of a velvet box. “Man-made diamonds should not cost the same as natural stones — they really are totally separate businesses,” Steve Coe, the general manager of Lightbox.