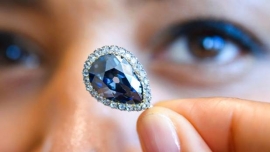 Sotheby's Magnificent Jewels and Noble Jewels auction held in Geneva yesterday, May 15, certainly lived up to its name, as the historic Farnese Blue diamond - given in 1715 by the Philippines to the Queen of Spain Elisabeth Farnese, wife of King Philip V of Spain - smashed its pre-sale estimate of $3.7 to $5.3 million, earning $6.7 million at the fall of the hammer. It was the first time the exceptional 6.16-carat, pear-shaped, fancy dark grey-blue, SI1-clarity stone had ever appeared on the market, after having remained in the same family for over three centuries. "We were expecting a good result but we started from $3.5m and we ended up with $6.7m, so we exceeded our expectation," said Daniela Mascett, deputy chairman, Sotheby’s Europe and senior international jewelry specialist.

Perhaps the bigger story was the sale of two large D-color flawless diamonds, both of which belong to the highly rarefied sub-category of Type IIa diamonds, which make up just 2% of gem diamonds and boast the highest optical transparency. The first of the big stones, a 51.71-carat round, brilliant cut diamond, fetched $9.2 million, at the high end of its estimate. It ranks as the second largest D Flawless brilliant-cut diamond ever to have appeared at auction. The second, similarly perfect, weighing 50.39 carats, sold for $8.1 million. This gem ranks as the second largest D Flawless diamond of its shape ever to have come to auction. The round and oval diamonds were discovered in Botswana as rough diamonds of 196 carats and 155 carats, and cut in Antwerp.

“The timeless appeal of diamonds was reasserted tonight in Geneva, with three exceptional stones cut centuries apart capturing the attention of international collectors,” added Mascetti. “The Farnese Blue is quite simply an unforgettable diamond, and everyone who set their eyes on it was mesmerized by its extraordinary color…. We were also delighted be the results achieved by the two white diamonds over 50 carats in the sale, whose color, cut and clarity are synonymous with 21st-century perfection.”

According to Anthony DeMarco writing for Forbes, Sotheby’s Geneva sale of 372 lots achieved $85.6 million, with 82% of the lots sold and 70% of the lots exceeding their high estimates. In a testament to the increasingly global nature of the market, 650 bidders from 50 countries participated in the auction at the Mandarin Oriental, Geneva hotel. A total of 15 lots sold for more than $1 million and at least five auction records were set. White and fancy colored diamonds, signed pieces and jewels with aristocratic provenance all sold well.