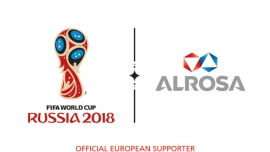 The line-up of European Regional Supporters of the 2018 FIFA World Cup has been completed today as Russia’s ALROSA, a giant in the world diamond mining industry, joined Alfa-Bank, Rostelecom and Russian Railways, according to a statement from the football organization. As part of their deal with FIFA, ALROSA has been granted brand association rights for the region and promotion rights on social media. They will be featured on LED boards in all stadiums during the tournament and benefit from product exposure in selected areas of the FIFA World Cup venues.

“With the FIFA World Cup just around the corner, we are very pleased to have another strong stakeholder like Alrosa on board,” says FIFA’s Chief Commercial Officer Philippe Le Floc’h. “The tournament will be a celebration of football in Russia and all over the globe. It is also an incredible international marketing platform, reaching billions of people in every single territory in the world.” The regional approach to sponsorship offers a targeted way for commerical affiliates to engage with their target audience, FIFA states, offering companies that do not have the desire or the means to enter into a global sponsorship agreement to acquire rights which cover a significant geographical region. The Regional Supporer level allows companies within the pre-defined global regions to promote an association with the respective FIFA event in the five regions (Europe, North/Central America, South America, Africa/Middle East and Asia).

Russia ranks first in volume and value among the countries producing diamonds, with ALROSA responsible for 95% of its diamond output. This makes ALROSA a world leader and one that operates throughout the production chain – exploring, mining, manufacturing and selling diamonds. FIFA's Sponsorship Strategy is available here.