Equality and Eliminating Sexual Harassment in the Jewelry Industry 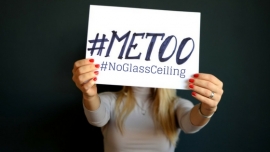 The trade is facing its #MeToo moment after stories of degrading behavior emerge. In her blog and trade journal Barbara Palumbo, who has spent 30 years in the jewelry and watch industry, wrote about the prevalence of sexual harassment in the industry — “Women deal with this literally every single day in our industry”.

Stories include salesmen telling her to show more cleavage; a senior jeweler making sexual innuendos; and a high-profile jeweler touching her genitalia while she was having a photo taken with him at a trade show. Since then, numerous women have reached out with their own allegations of sexual harassment, and thanking her “for speaking out”. Sexual harassment has become a burning topic in politics, media and in business, as more women speak out following years of silence.

Last year articles posted by the Washington Post referred to sexual harassment suits that jewelers such as Sterling Jewelers, Signet and luxury jeweler Paul Morelli had faced. Following the report, Signet Jewelers, formed a board-level committee to promote “respect in the workplace” and brought in former judge Barbara S Jones to review its policies and practices on equal opportunity and workplace expectations. Women are taking their own steps to improve the industry. The Women’s Jewellery Network was launched in the UK last September to promote women throughout the industry, as well as to offer support and connections, says co-founder Victoria McKay, who is the London Diamond Bourse’s chief operating officer. “I can’t believe 100 years after getting the right to vote, we are having the discussion about women’s rights in the workplace,” says Ms McKay. A gender imbalance at the top of the industry stops women’s voices from being heard, says Ms McKay, who is one of the few female leaders at the bourse.

FT research in 2017 found that only six out of 31 luxury industry chief executives were women, and in January 2018 the WJN launched its #noglassceiling campaign to further female representation in boardrooms and management suites. Which prompted membership requests to jump 20 per cent; their International Women’s Day event sold out; and women in the industry started to talk more openly about gender imbalances and sexual harassment in the workplace.

The WJN, like the WJA, encourages women to connect with and support each other, as well as organizes events to network and to hear advice from female industry leaders on how they rose to the top. The Women’s Jewelry Association, the US equivalent, is taking a more corporate approach by offering codes of conduct and handbooks on sexual harassment to employers at trade shows. Sara Yood, senior counsel at the Jewelers Vigilance Committee, says their “goal is to engage more business owners on the topic of sexual harassment in the workplace, and to help them develop tools such as no-tolerance policies, employee handbooks etc that will help them prevent harassment in the workplace and retain employees,” Ms Yood says.