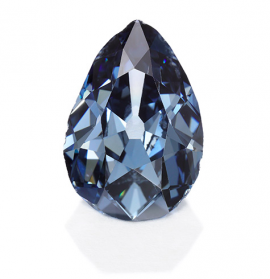 One of the foremost historic diamonds – The Farnese Blue – will appear on the market for the first time in history this spring, after having remained in the same family for over three centuries, according to a press release from Sotheby's auction house. The existence of the diamond was apparently unknown until recently, except for the relatives of the family and its jewellers. The 6.16-carat pear shaped blue diamond, described as "Fancy Dark Grey-Blue", will be offered in Sotheby’s sale of Magnificent Jewels and Noble Jewels (15 May, Geneva) with an estimate of  $3.7 to $5.3 million, or 3.5 - 5 million Swiss francs. Check out the video here.

A gift from the Philippines to Elisabeth Farnese, Queen of Spain (1692-1766), the legendary diamond has subsequently passed down through four of the most important royal families in Europe: Spain, France, Italy and Austria, the statement reads. Witness to 300 years of European history, from the aftermath of the Spanish Succession War to the fall of the Habsburg Empire, the diamond has travelled across the continent for centuries. And all this time, it was kept secretly in a royal casket. Excepting close relatives, and of course the family jewellers, no one knew of its existence. Rob Bates of JCK adds that, "among the many royals believed to have owned this gem is Marie-Thérèse de France, also known as “Madam Royale.” She was the first child of King Louis XVI and Marie Antoinette and the only one of the couple’s children believed to have survived the French Revolution."

Blue has often been identified as the colour of kings and in the 17th and 18th centuries, blue diamonds were viewed as the ultimate royal gift. Like the famous Hope and Wittelsbach diamonds, the Farnese Blue was certainly found in the famed Golconda mines of India, which was the sole source of diamonds until the discoveries in Brazil in the 1720s. David Bennett, Chairman of Sotheby’s International Jewellery Division and Co-Chairman of Sotheby’s Switzerland, said: “It is difficult to put into words the excitement of holding between thumb and forefinger a gem discovered centuries ago, knowing it originated in the legendary Golconda diamond mines of India. This stone has witnessed 300 years of European history, and in colour is reminiscent of historic Golconda blue gems such as the Hope diamond.”