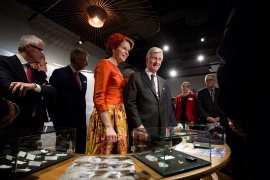 The Antwerp World Diamond Centre (AWDC) took part in the first Belgian State Visit to Canada (BELCAN 2018) in over 40 years, joining the King and Queen of the Belgians, Minister of Foreign Affairs Didier Reynders and Secretary of State for Foreign Trade Pieter De Crem, along with 100 major Belgian companies. Diamonds are the most important product in the trade relations between Belgium and Canada, representing 21% of all Canadian imports to Belgium. Canada is the third largest diamond producing country (in value) worldwide, and Belgium is the world's leading importer of Canadian diamonds. In 2016, the country produced about 13 million carats of diamonds for a total value of US$1.4 billion, and roughly 60% of its diamond output – or around $860 million – were traded directly on the Antwerp diamond market. Almost the entire production of the Ekati, Diavik and Renard mines are traded in Antwerp, while half of the Gahcho Kué mine production goes straight to the market in Antwerp. Canada accounted for 10% of the world’s total diamond output in 2017.

During the visit, the AWDC, together with the Government of the Northwest Territories, organized the “Diamond Experience”, an exhibition in the Canadian Museum of Nature in Ottawa, where the royal couple received an interactive look at the process of diamond mining in the Northwest Territories and met representatives of the indigenous population. They were guided through the different phases of the mining process, received in-depth information about diamond exploration, diamond sorting and the economic, social and environmental impact diamond mining has on the area and the local community communities of the NWT. The exhibition was organized in cooperation with De Beers, Dominion Diamond Mines, Rio Tinto, Mountain Province Diamonds, Maple Leaf Diamonds and Almod Diamonds Limited, with the support of Belgium's Federal Public Service Foreign Trade and Development Corporation and Flanders Investment and Trade.

AWDC CEO Ari Epstein commented, “Canada is one of Antwerp’s most important trade partners when it comes to diamonds, and the country continues to demonstrate even greater potential on a global scale, with several promising exploration projects underway. More than half of their rough output goes straight to the market in Antwerp, and this share is only increasing. More and more Canadian mining companies are opting for Antwerp due to its unique advantages such as transparency, expertise and a critical mass of buyers and sellers.” AWDC spokeswoman Margaux Donckier added, "It is no coincidence that Canada has selected Antwerp as the primary market for its diamonds, as our two countries share the same values, such as sustainability, transparency and a very strict implementation of the Kimberley Process Certification Scheme."