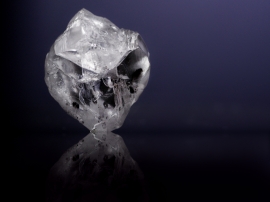 Gem Diamonds this morning announced the sale of the "Lesotho Legend": the exceptional quality 910 carat D colour Type IIa diamond recovered from the Letšeng mine in January 2018 achieved a price of US$40 million on tender in Antwerp on 12 March, 2018. It is the fifth largest gem-quality diamond ever recovered in history and the third largest in a century. The $40,000 price tag equates to $43,956 per carat, falling just short of the $47,777 per carat earned from Lucara Diamonds' sale of the 1,109 carat Lesedi La Rona, which sold for $53 million in September 2017, and far off the pace of the most expensive rough diamond ever sold - the 813 carat Constellation diamond, also recovered by Lucara, which earned $63.1 million in 2016, or $77,614 per carat. Gem Diamonds sold the Lesotho Promise, a 603-carat rough diamond, for $12.36 million, or $20,498 per carat, in 2006.

Clifford Elphick, Gem Diamonds' Chief Executive Officer, said, "We are delighted with the outcome of the sale of this iconic diamond, which demonstrates the exceptional quality of The Lesotho Legend itself, as well as reaffirming the unique quality of the Letšeng diamond production.“ In an interview with Gem Diamonds CEO Clifford Elphick and Commercial Director Glenn Turner at the Gem Diamonds office in Antwerp after the discovery of the diamond, they explained what the recovery of these large diamonds does for Lesotho and the commnity. Glenn Turner said, "People tend to forget that we put a tremendous amount into the local community around the mine. When we celebrate the recovery of the diamonds, so too does the community around the mine see the benefit from it. There are literally thousands of people whose lives really change when these diamonds are found." Clifford Elphick added, "Over 60% of the revenue from this diamond will flow back into the nation of Lesotho. That is a big amount. They receive royalties, taxes, dividends, withholding taxes, etc. The mine itself, as a result of its success, employs about 1,450 people, and around 95% are local Lesotho people." The company has set up a 910 Community Project to funnel proceeds from the Lesotho Legend into the community.

A video about the Lesotho Legend is available here.