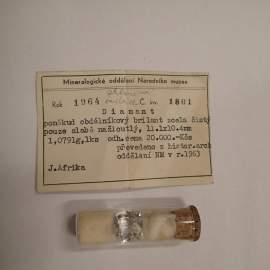 Diamonds and other precious stones forming part of a Czech National Museum collection in Prague, assumed to be worth millions of dollars, were discovered during a routine audit to be fakes and synthetics. The cheap imitations include a 5-carat diamond, which is just a piece of glass, and a 19-carat sapphire which turned out to be synthetic. As told by Radio Praha, "The major reconstruction of the headquarters of the National Museum in Prague has revealed more than just peeling paint and cracks in the walls. An inspection of the first 400 of the museum’s 5,000 precious stones and minerals showed that not all of them are what they were believed to be." The National Museum’s main building, which sits at the top of Wenceslas Square, has been closed for seven years as it underwent refurbishment, and has been sorting through its various collections as it plans to reopen for Czechoslovakia’s 100th birthday in October 2018.

Ivo Macek is head of the museum’s precious stones department. “What we have here is still a sapphire, but it is not a natural stone as was documented when the museum gained it for its collection in the 1970s, it was artificially created so it does not have the value we thought it did. It was acquired for 200 thousand crowns and today it would have been worth tens of millions. And what we thought to be a 5-carat diamond was in fact plain glass given a diamond cutting.” The sapphire cost CZK200,000 ($9,786 at current rates) in the 1970s, and would be worth millions today. A thorough inspection is now taking place of the remaining stones in the museum’s collection and the results are not pleasing – at least half the rubies are also synthetic.The massive audit of artefacts currently underway will take until 2020, as the museum is planning to check the authenticity of all its artefacts – including musical instruments, precious metals and paintings.

The National Museum is now trying to ascertain how the fakes came to be part of its collection, whether it was due to lack of expertise or a scam on the part of former employees. Tracing the story is not proving easy, the diamond has been in the museum’s collection since the 1960s and the sapphire since the 1970s. The person in charge of the collection back then is already dead and although the gems were kept under lock and key from the start, it will be hard to ascertain what happened. The collection of five thousand precious stones and minerals was located at different sites and was moved on more than one occasion. Only 400 of the museum’s 5,000 precious stones and minerals have been audited thus far, but all the most valuable have been checked.

Michal Stehlík, the museum’s deputy director, is looking on the bright side. “When you have a collection of 20 million artefacts then a certain fraction of that may prove to be problematic. These things happen. So we will push ahead with the audit and I think we may even organize an exhibition of fakes in this and other world museums when it is concluded in 2020.”