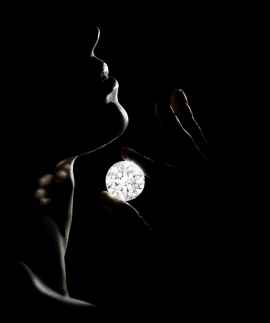 To celebrate the one-year anniversary of its bijoux boutique on Bond Street in London, Sotheby's Diamonds revealed its most exceptional gem to date: a 102.34-carat, D-Flawless, Type IIa round brilliant diamond, which the auction house describes as “the rarest and most valuable white diamond ever to come to market”. The stone bears the highest possible ratings in terms of color (a D grade representing the purest, whitest hue), clarity (Flawless, meaning there are no internal or external blemishes even when viewed under a microscope) and has excellent cut, polish and symmetry, making it the largest such stone known to man. Type IIa diamonds are an ultra-rare subgroup of gem-quality diamonds, which comprise less than 2% of all gem diamonds. Diamonds in this group are the most chemically pure type of diamond and often have exceptional optical transparency.

The Gemological Institute of America (GIA), in a letter dated 8 September 2017, called it the “Largest Round Shaped, D colour, Flawless diamond ever graded.” To date, only seven D-colour diamonds weighing more than 100 carats have ever appeared at auction, and none of them have been round brilliant cuts. Diamond cutters usually prefer to maximise the yield from a rough stone by producing a pear or emerald-cut stone. Unearthed in Botswana, the diamond was cut from a 425.40-carat rough mined by the De Beers Group. The cutting process took over six months and required the diamond to be transported between Johannesburg and New York. Intense study and mapping by Sotheby’s Diamonds partner Diacore resulted in 25 stones – "a process that took over 6 months of careful, painstaking cutting and polishing."

Despite being over 61 carats smaller than the stone that currently holds the title of the world’s most expensive D-Flawless diamond - the 163.41-carat emerald-cut held within the De Grisogono necklace that sold for $33.7 million in Geneva last November - due to its exceptional quality and rarity, the brilliant-cut diamond is “expected to greatly exceed” the current world-record price, according to a Sotheby’s Diamonds representative. The diamond will not be auctioned but will be sold privately by Sotheby’s Diamonds.