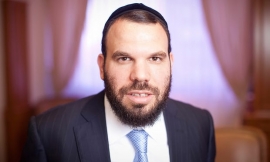 The U.S. sanctioned Israeli billionaire Dan Gertler, one of the biggest individual mining and diamond investors in the Democratic Republic of Congo, in what it calls a clampdown on human-rights abusers and corrupt actors, write Thomas Biesheuvel, Mark Burton, and William Clowes for Bloomberg Politics. The U.S. Treasury said Gertler has used his close relationship with the country’s president, Joseph Kabila, to amass a fortune through corrupt and opaque deals. Between 2010 and 2012 alone, Congo reportedly lost over $1.36 billion in revenues from the underpricing of mining assets that were sold to offshore companies linked to Gertler, it said.

“Gertler has used his close friendship with DRC President Joseph Kabila to act as a middleman for mining asset sales in the DRC, requiring some multinational companies to go through Gertler to do business with the Congolese state," the U.S. Treasury said in a statement. "As a result", it continues, "between 2010 and 2012 alone, the DRC reportedly lost over $1.36 billion in revenues from the underpricing of mining assets that were sold to offshore companies linked to Gertler. The failure of the DRC to publish the full details of one of the sales prompted the International Monetary Fund to halt loans to the DRC totaling $225 million. In 2013, Gertler sold to the DRC government for $150 million the rights to an oil block that Gertler purchased from the government for just $500,000, a loss of $149.5 million in potential revenue. Gertler has acted for or on behalf of Kabila, helping Kabila organize offshore leasing companies."

Under the sanctions, any assets held by Gertler within U.S. jurisdictions will be blocked and U.S. individuals are prohibited from engaging in transactions with them. The U.S. “is taking a strong stand against human rights abuse and corruption globally by shutting these bad actors out of the U.S. financial system,” Treasury Secretary Steven Mnuchin said in the statement. “Treasury is freezing their assets and publicly denouncing the egregious acts they’ve committed, sending a message that there is a steep price to pay for their misdeeds.” Gertler, the grandson of Moshe Schnitzer, the first president and co-founder of the Israeli Diamond Exchange, grew up in the diamond industry. He is the founder of Dan Gertler International (DGI), one of the largest wholesale distributors of rough and polished diamonds globally. He owns diamond mining interests in the DRC along with a variety of other assets.