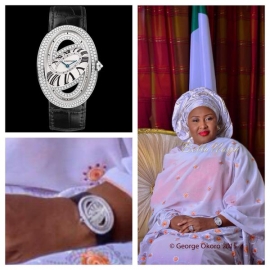 Last March, Muhammadu Buhari was elected President of Nigeria. Presenting himself as a 'man of the people', Buhari condemned the widespread corruption in Nigeria during his election campaign and it was no secret that he had to go to great lengths just to pay the registration fee for participating in the election. It is therefore inconvenient to say the least that his wife Aishi was photographed during his inauguration wearing what appears to be an extremely expensive timepiece - namely, a Cartier Baignoire Folle, 18-carat diamond watch estimated at $50,000 dollar. Others claim it is a cheap imitation. Either way, it has caused great consternation  among the Nigerian people, and is leading a life of its own on Twitter under the hashtag #CartierGate. Sentiment appears to be: the more things change, the more they stay the same.