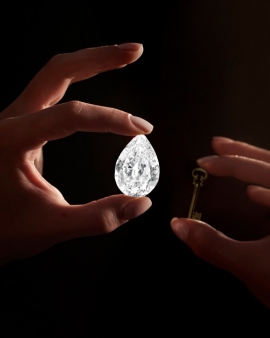 In Sotheby's single-lot live auction in Hong Kong, the pear-shaped, 101.38-carat, D-color diamond known as "The Key 10138" sold for US$12.3 million. The sale marks an industry-wide breakthrough, making the price achieved for this diamond the highest for any jewelry or gemstone purchased with cryptocurrency. The buyer was a private collector.

Before the sale, Sotheby's announced the diamond was the first jewelry piece for which the company would accept digital coinage and carried the highest estimate ever for a physical object publicly offered for purchase with cryptocurrency. The payments options were regular currency, Ether, or Bitcoin, facilitated through Coinbase Commerce, one of the world’s largest cryptocurrency exchanges.

The sale of the diamond comes at a time when demand for white diamonds is particularly strong. This year 80% of the white diamonds offered in Sotheby’s Magnificent Jewels auctions found buyers, of which 30% were new to Sotheby’s. "This is a truly symbolic moment. The most ancient and emblematic denominator of value can now, for the first time, be purchased using humanity’s newest universal currency. Never was there a better moment to bring a world-class diamond such as this to the market," said Wenhao Yu, Deputy chairman of Sotheby's jewelry in Asia.

Less than ten diamonds over 100 carats have ever been offered at auction, of which only two have been pear-shaped, Sotheby’s stated. "The Key 10138" is the second-largest pear-shaped diamond to appear on the public market, following Harry Winston's "Winston Legacy", the company noted. The "Winston Legacy", a 101.73-carat, D-flawless, Type IIa diamond, went under the hammer for US$26.8 million at a Christie’s auction in Geneva in 2013.