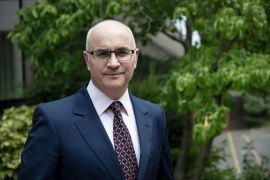 Opsydia, a UK-based diamond security innovator, announced former De Beers Group Senior Executive, Jonathan Kendall, would join their non-executive Board of Directors, starting immediately. The company, known for its sub-surface laser technology, can create nano-scale identifiers requiring a 100x microscope to be legible. This breakthrough would make it possible for internally flawless natural diamonds to have a logo, serial number, or encrypted code placed beneath their surface without affecting their clarity grade.

The identifiers can be placed within a diamond to create a physical link between a specific stone and its grading report, blockchain record, or branded jewelry origins. Due to their strategic placement within the diamond, the inscriptions cannot be removed.

Last year Kendall stepped down as the President of De Beers Group Industry Services and the Institute of Diamonds, following five years in the role. He has been involved with CIBJO for nearly 15 years and will continue to serve as their Executive Vice President. With over 20 years of experience across all areas of the diamond pipeline, including rough sales, marketing, and business development, to support Opsydia as they focus on diamond security initiatives internationally.