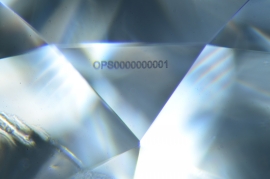 Opsydia, a UK-based diamond security innovator, announced its sub-surface laser technology can create nano-scale identifiers requiring a 100x microscope to be read. This breakthrough would make it possible for internally flawless natural diamonds to have a logo, serial number, or encrypted code placed beneath its surface without affecting its clarity grade.

The identifiers can be placed within a diamond to create a physical link between a specific stone and its grading report, blockchain record, or branded jewelry origins. Due to the placement of the inscription within the diamond, the laser etchings cannot be polished off.

To read the identifiers, the diamond would either need to be placed under a microscope with >100x magnification or with an Opsydia ID viewer – a device capable of reading identifiers that is currently in the research and development phase.

“This is a vital milestone for Opsydia as it means every diamond, no matter its clarity or size, can be secured with an identity feature beneath its surface,” said Andrew Rimmer, Opsydia's chief executive officer. “This presents new opportunities for grading houses, diamond manufacturers and luxury diamond jewellery brands that want to achieve the next level of security and anti-counterfeiting, while also supporting existing blockchain initiatives.”