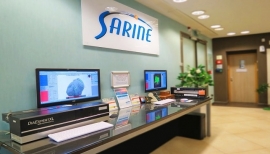 Sarine Technologies could not overcome the market-driven losses sustained in the first half of 2019, ending the year with a net loss of US$1.4 million as group revenue fell 12% to US$51.3 million amid tough industry conditions. The group stumbled to a net loss of US$2.8 million in the first half of FY2019 before the gradual stabilisation of conditions in the industry in the second half of 2019 helped them halve that loss by the end of the year. Sarine made a modest net profit of US$0.2 million in Q3 2019 with further improvement on profitability to US$1.2 million in Q4 2019.

In H2 2019, Sarine realised revenues of US$28.8 million, which is 28% more than the US$22.5 million realised in H1 2019. In Q4 2019, the group's revenue climbed 20% to US$14.6 million and net profit rose 1,200% to US$1.2 million, as compared to Q4 2018. The company explained that the well-documented excess of rough supply on the market relative to polished demand led to substantial declines in the sales of rough diamonds by miners throughout 2019. This, along with the lack of Chinese tourists travelling the the U.S. (trade war) and Hong Kong (social unrest) reduced polished demand, and thus polishing activities, by over 25% for the year, with a gradual improvement in Q4. The reduction of rough stones entering the pipeline in Q4 2019 led to lower recurring revenue from Galaxy scanning activities in Q4. However, they add, this decline was offset by higher sales of capital equipment in India and North America.

During Q4 2019, they write, there were "signs of a return to a more balanced market, as excess inventories in the midstream eased," and the quantities of rough stones entering the production pipeline picked up. The key issue, however, was continued soft polished demand. "Continued civil unrest in Hong Kong significantly impaired retail sales of luxury items there, with most retailers reporting decreases of 40-50% in sales. Sales to Chinese consumers seem to have moved into mainland China, with most jewelry chains there reporting single digit increases."

Looking forward, the company expects to see "positive macroeconomics in general, and expanding consumer appetite for luxury goods including diamond jewelry, in particular, provide a firm underpinning for the diamond industry in 2020 and beyond." However, they add, "The effects of the Novel Coronavirus outbreak in China, a potentially significant impediment to its economy, in general, and to retail luxury sales, in particular, are still not clear." If the outbreak gets worse, they say, "short-term implications could be significant to the diamond industry (and many others). A significant slowdown in [China] would have a meaningful negative impact on our polishing customers in the midstream (as well as a ripple effect up to the upstream producers). Aside from the outbreak, they note that in India, their largest market, banks in India continue to implement their restrictive credit policies, though the impact on manufacturers' working capital has eased somewhat due to the significant reductions in the quantities of rough diamonds entering the midstream pipeline.