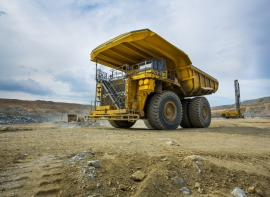 Anglo American and Williams Advanced Engineering (WAE) have joined forces to develop what will become the world's largest hydrogen powered ultra-class electric mining haul truck. The monster truck is key to Anglo American’s Sustainable Mining Plan and is part of their efforts to live up to their assertion that mining ought to contribute to a low-carbon world.

This massive, 290-tonne ultra-class truck, currently running on diesel fuel, will be gutted and retrofitted with an enormous 1,000-plus kWh lithium battery pack, built by WAE to be scalable if further capacity is needed in the future. The battery system will be capable of recovering energy through regenerative braking as the haul truck travels downhill. This, and having the hydrogen tank onboard means the truck can stay in constant operation without needing to be taken offline for long battery charging sessions. A power storage unit of this size is nearly double that of Switzerland's eDumper, which holds the current 'world's biggest electric vehicle' record.

“With their extensive industry experience, we believe Williams can help us to deliver this ground-breaking project, which is part of our plan to create a smart energy mix that moves us closer towards our carbon and energy targets for 2030 and, ultimately, our vision of operating a carbon-neutral mine,” Anglo American head of technology development Julian Soles said. Williams managing director Craig Wilson added: “Operating within a harsh environment is something we are familiar with as sole battery supplier for the Extreme E program and we remain committed to supporting long-term sustainability projects.” Williams plans to design and build the power units in Grove, Oxfordshire, which will be integrated into an existing haul truck. Testing is scheduled to take place later this year at Anglo American’s Mogalakwena open pit platinum mine in South Africa.

Anglo American has committed to reducing its global greenhouse gas emissions by 30 percent by 2030. "Our purpose is to re-imagine mining to improve people's lives," says Anglo American in the 'Sustainability' section of its website. "Mining cannot continue its long path of simply scaling up to supply what the world needs. We need to do things differently if we are to transform our carbon footprint. We need to reduce our energy and water usage, and our emissions – and we are committed to doing exactly that. We’re on track to achieve our 2020 targets and are confident that our FutureSmart Mining technologies will be a key driver of emissions reductions and of driving our operations towards carbon neutrality."