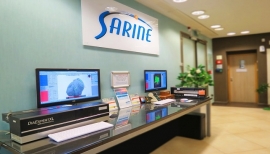 Sarine Technologies is expecting its second straight quarterly loss as the "prevailing negatives in the diamond industry midstream" are hurting their financial results. Demand for their diamond-manufacturing equipment relies on the manufacturing sector and thus indirectly on the rough trade that supplies it - two segments in the midst of a slump.

Specifically, during Q2 2019 Sarine says their midstream customers, largely Indian diamond manufacturers, continued to experience working capital issues due to credit tightening policies implemented by Indian banks. They also pointed to lab-grown diamonds having an unsettling influence on the market and said the ongoing trade disputes between the U.S. and China softened the critical Chinese market. "All these factors," they note, "adversely affected conditions in the industry’s midstream and resulted in a reduction of the Group's equipment sales as well as recurring revenues from inclusion mapping services."

Sarine currently expects to record a net loss similar to that of Q1 2019, which was $1.3 million, representing a robust downturn from the $4.1 million in profit recorded in Q2 2018. The company anticipates its revenue for the quarter to be approximately $11.5 million, which is 5% better than in Q1 but is 36% lower than the $18 million it reported for Q2 2018.

Despite all of the hindrances, the Group says it sold a record 34 Galaxy-family inclusion mapping systems this quarter, one more than their previous record high established in Q1. "However," they add, "all of these systems were of the MeteoriteTM model [for smaller diamonds], which have significantly lower gross margins than the models for larger stones and, coupled with fewer inclusion mapping scans, as noted above, this continues to impair our overall gross margin similarly as in Q1 2019." Sarine expects to release the full report of our financials for Q2 2019 on 8 August 2019.