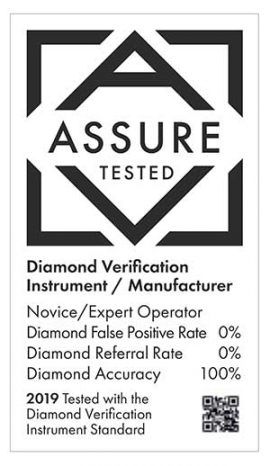 The Diamond Producers Association (DPA) and Signet Jewelers have published the first results of their ASSURE Program to independently and objectively test the performance of laboratory-grown diamond detectors (Diamond Verification Instruments). The program intends to eventually test and identify each machine on the market concerning how well they detected or referred man-made stones, including the rate at which they gave false positives. The ASSURE Program partnered with 11 manufacturers representing the 18 most widely available Diamond Verification instruments in the market; the tests were implemented in accordance with a standard developed in collaboration with the independent third-party test agency UL and a Technical Committee, consisting of leading scientists and academics from major gemological organizations.

In the first round of testing, 11 instruments were tested on a "highly contaminated" sample consisting of 1,000 natural diamonds and 200 synthetic diamonds including "very challenging" synthetic diamonds, some of which are not yet available in the market. When needed, 200 diamond simulants were added to the sample. The machines are designed different specific purposes, either to refer suspected synthetics for further testing or detect them conclusively from the start. Only three machines that correctly identified all of the synthetic diamonds analyzed with 100% accuracy: Yehuda’s Sherlock Holmes, which costs $6,495, had 100% accuracy in identifying synthetic diamonds but also wrongfully identified 2.5% of natural stones as unnatural. De Beers’ DiamondView, at $35,000, was also 100% accurate, as was Presidium’s Synthetic Diamond Screener II, which sells for $599, but that machine wrongly identified 15.5% of natural diamonds as synthetic.

The fastest machine of the group was M-Screen+ from HRD Antwerp, a fully-automated diamond verification instrument capable of screening more than 12,000 stones an hour while performing with 100% accuracy. It carries a $63,000 price tag. Two other De Beers products, the SYNTHdetect ($17,000) and DiamondSure ($18,200), accurately referred all lab-growns for further testing, as did the Gemological Institute of America’s (GIA) iD100 ($4,995) - a manually-opeated portable desktop diamond verification instrument for mounted and loose stones. This is just the first phase of the testing. Another eight machines are still being tested, as some manufacturers chose to refine and resubmit their machines after the initial testing.

There are about 40 commercially available lab-grown spotting devices, and the Assure Project hopes eventually to test them all. All the machines that participated in the test will get an Assure sticker, which can be used on their machines and displays their accuracy rate.