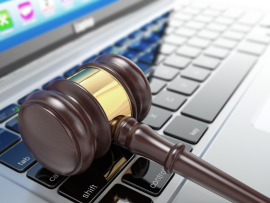 Last week, the United States' Supreme Court ruled 5-4 in favor of allowing states to collect sales tax from online retailers even when a retailer has no physical presence in that state, sending shock waves and uncertainty across the retail landscape. States argued they were losing out on billions of dollars worth of online sales taxes annually as a result of the precedent set by  a 1992 court decision, Quill Corp vs. North Dakota; the new Wayfair v. South Dakota ruling reveses the prior ruling. In the majority opinion, Justice Anthony Kennedy said that times have changed to such a degree that online retailers no longer qualify for “an arbitrary advantage over their competi­tors who collect state sales taxes” by claiming they don’t have a physical presence in a state.

David Bonaparte, CEO of Jewelers of America, commented, “This historic decision from the court in support of sales-tax fairness is a major victory for the jewelry industry, providing a clear path to level the playing field between traditional and online retailers,” but it is unclear whether the legislation will be as beneficial to small businesses as expected. Platforms for small online sellers, like ebay and Etsy, are concerned about what it sees as “significant complexities in the thousands of state and local sales tax laws”, according to Etsy CEO Josh Silverman. eBay echoed those sentiments: "the operations of small businesses are different than large retailers, and state tax actions targeting them raise additional legal questions that are not addressed by this decision,” eBay wrote in a statement. “Now is the time for Congress to step in and provide clear tax rules, with a strong small business exemption, to help small businesses take advantage of the Internet to grow and create local jobs.”

It is also not clear how damaging this is to major retailers, as 31 of the 45 states with sales tax had already expanded their tax authority to extend to online retailers prior to the new ruling, with 'economic interest' rather than physical presence being the standard. Most of the larger online retailers like Amazon already collect sales tax, and the new ruling could potentially harm smaller online retailers that do not have that system in place. As Rob Bates points out, while jewelers were happy with the news, and huge online retailers said it would have little impact, "smaller online companies treated the news as almost a death sentence, noting the burden that they will now have to shoulder collecting sales tax from 9,000 jurisdictions throughout the United States, all with different tax regimes." Online sellers that do not charge sales tax on goods shipped to every state, such as jewelry website Blue Nile, could also feel some pain.

As Rob Bates concludes, "The Wayfair decision is huge news in the retail world, though analysts differed in how much it may change the current competitive climate for brick-and-mortar sellers. Consumers are attracted to online shopping for a variety of reasons that go beyond sales tax—including convenience, selection, the ability to comparison shop, etc. Even with this decision, brick-and-mortar retailers will still have to battle it out with online retailers. The only difference is the fight will be a little fairer from now on."