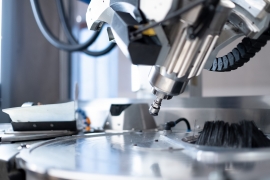 This morning, the Antwerp World Diamond Centre (AWDC), together with its research center the Scientific and Technological Research Center for Diamonds (WTOCD), unveiled a revolutionary technology that fully automates and accelerates the diamond polishing process: Fenix. This technology fundamentally transforms that process that has not changed since Lodewijck Van Bercken, a 15th-century jeweler and diamond cutter in Antwerp, in 1456 discovered that diamond could be polished with diamond. Watch the preview video here.

Diamonds have been polished by hand on a polishing wheel for centuries, a time-consuming and labor-intensive process, which has taken place in Antwerp with declining frequency due to the comparatively high wages paid to laborers. In the 1960s, Antwerp became the modern leader of the diamond trade in part due to the large number of polishers - some 10,000 - that plied their trade in Antwerp. However, the number of polishers in Antwerp has dwindled in the decades since due to high wages in Belgium, and while large and exceptional diamonds are still sent to Antwerp to be analyzed, mapped and polished, the cost of polishing smaller stones in Europe has become prohibitive.

Antwerp has struggled to find an answer to this issue, and has invested heavily in innovation to do so. Now, after more than ten years of research, the WTOCD has succeeded in developing a technology that fully automates the polishing process, and moreover, is able to polish a diamond 10 to 20 times faster than by hand. Using the new machine, called Fenix, a stone that would typically consume an entire day can now be polished in one and a half hours. Not only is Fenix faster, it is also more accurate and lowers polishing risks, which is obviously of great importance when processing a stone as valuable as diamond.

Equally as important as its exceptional speed and accuracy, however, perhaps the most revolutionary aspect of Fenix is that it is 'grain-independent'. A diamond formed in nature has specific grain or growth orientation of the crystals. Working according to the grain is an intensive and time consuming process; removing the need to take the grain into consideration when polishing eliminates a great amount of time and risk right from the start of the process.

AWDC CEO Ari Epstein commented, “This discovery fundamentally changes the diamond polishing process, and Fenix can be a game-changer for the Antwerp diamond industry. This technology gives Antwerp the potential to bring a share of diamond polishing back to Antwerp. Given the fact that such tremendous volumes of rough stones are traded here, and 90 percent of that is polished elsewhere, the potential to immediately polish stones here and then trade them out of Antwerp can spark a genuine revolution in our diamond trade."

Yves Kerremans, Director of the WTOCD, explained that during the development process, they tested Fenix on stones that had been considered unpolishable and had been locked away for fifty years waiting for the right innovation to come along. "Some diamonds even have a double grain, two different directions of internal growth, making them fundamentally unprocessable. This is not an issue for the Fenix. Add to this the fact that it is a cold polishing process - the heat generated in the manual polishing process carries the risk of breakage and inaccuracy - and this technology is a tremendous value creator. Just as importantly," he adds, "it implements what is planned. Mapping the cut of a polished diamond from a rough stone takes great expertise. Transferring that information to the polisher has long been a problem. Now it can be communicated directly." Several Antwerp-based diamond companies are currently testing the technology, which is scheduled to be available to the public in September.