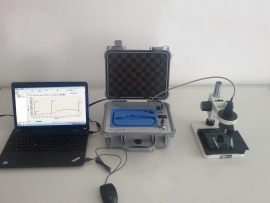 Hong Kong-headquartered Diamond Services has announced the release of a mini Raman Spectrometer that can detect HPHT and CVD lab-grown synthetic diamonds and HPHT color-treated diamonds, as well as diamond simulants. The desktop-sized device has been designed specifically to provide individual diamond and jewellery companies with a technological capability that, thus far, has typically been the exclusive domain of well-equipped gem labs. It is equipped to test mounted and non-mounted stones, and deliver its results in an easy-to-read and interpret format. It will cost up to 90% less than the equivalent Raman Spectrometer systems used by the leading gem labs.

"We believe that the new system is a game changer," said Joseph Kuzi, Diamond Services' founder and president. Rather than having to send suspected synthetic or treated stones to properly equipped labs, "The mini Raman Spectrometer will enable them to conclusively identify such goods on the spot." The device will be launched in September at the Hong Kong Jewellery & Gem Fair.