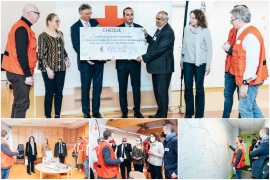 To support the victims of the flood disaster in Belgium last July, the Antwerp diamond community donated a cheque of €175,112 to the Belgian Red Cross for their solidarity action “Helpen helpt”.

“At the request of several diamond companies, a campaign was launched by 7 sector organizations to support the initiative of the Belgian Red Cross”, said Nader Murad, Antwerp diamond dealer. “Many companies and individuals from the diamond community made a donation, adding up to the €175,112.”

The collected funds are going entirely to the victims of the disaster through various projects, led by the Belgian Red Cross.

Melissa Smet, an organizing member of the Young Diamantaires, is very pleased with the result of the campaign: “Not only large diamond companies but also young entrepreneurs and individuals made a donation, which shows the flood disaster really affected the entire diamond community. With this initiative, the Antwerp diamond community wants to show all those affected by the disaster are in our thoughts”, she concluded.

The handover of the cheque took place in the former hospital of Montegnée in the province of Liège, where the Belgian Red Cross opened a shelter with room for 200 homeless victims, including families with children, who can stay there during the cold fall and winter months.