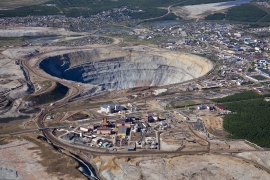 ALROSA, the world's largest producer of rough diamonds in carats, announced it would invest nearly US$60 million (at least RUB 4.2 billion) in the next five years for the social and economic development of the Republic of Sakha (Yakutia) and local communities in the regions. The miner is committed to a socially responsible way of doing business, ensuring social and economic stability in Yakutia, one of the most remote regions in the Northeast of Russia with a harsh climate and sophisticated logistics.

“ALROSA implements a vast range of social initiatives, including those in education, healthcare, social services, sports and culture, science, environmental protection, etc” – said ALROSA CEO Sergey Ivanov. In addition, the miner has signed separate agreements with authorities of eight districts in and around Yakutia for the development of social, cultural, physical, medical, and educational facilities. As shareholders, the eight districts together received over US$300 thousand (RUB 22.5 billion) in dividends.

From its inception, ALROSA has complied with the highest social and environmental standards. The Company is highly ranked amongst international and environmentally conscious lists, such as the FTSE4Good index, which evaluates companies’ environmental, social, and corporate governance performance. In 2019, ALROSA received a Diamond Empowerment Fund (DEF) award for community stewardship. In 2021, ALROSA joined United Nations Development Programme initiative.