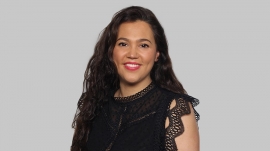 Elodie Daguzan, a 19-year veteran of the diamond industry and currently Head of Communications and Industry Relations at Rubel & Ménasché, has been appointed Executive Director of the World Diamond Council (WDC). She will officially assume duties on February 1, 2020, following approval by the organization’s Board of Directors.

Over the course of her long career in the diamond industry, Ms. Daguzan has held positions at several of the most prestigious high-end jewelry brands, spending the past eight years at Rubel & Ménasché, a Paris-based diamond trading company. There she was charged with educating the company’s clients about industry supply-chain developments, from mine to retail. Starting in 2017, Ms. Daguzan has represented the company in the WDC, serving as an active member of the Kimberley Process Task Force, and also of the Communications, Membership and Strategic Planning committees. A graduate of the Paris-Sorbonne, from which she received a degree in archeology in 2000, Ms. Daguzan is additionally a certified gemologist, having studied at the National Institute of Gemology in Paris and the Gemological Institute of America (GIA) in New York, from which she was awarded a Graduate Diamonds Diploma in 2004.

“We are delighted and most fortunate to have Elodie join us as Executive Director,” said WDC President Stephane Fischler. “She comes to the position with an innate understanding of the diamond industry and of the critical role played by the World Diamond Council. She also has the advantage of having represented the WDC in Kimberley Process Intersessionals and Plenaries around the world. We are confident that, through the contributions in her new role, the WDC will be even further strengthened."

“I am honored to join the staff of the WDC, and to be provided the opportunity of helping lead this uniquely positioned organization as it represents industry within the KP into the future,” said Ms. Daguzan. “These are particularly challenging times for the KP and the WDC, as it continually strives to ensure consumer confidence in diamonds, and meet the expectations of today’s customers.” Ms. Daguzan takes over as WDC Executive Director from Marie-Chantal Kaninda, who stepped down from the position toward the end of 2019 for a new opportunity in the Democratic Republic of Congo.