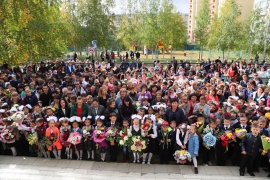 Russian diamond miner Alrosa, the world leader in diamond production, confirmed its status as a leader among gold and diamond mining companies in terms of investments in social programs, according to a study conducted by the PwC Advisory. The study, which is based on the official reports of companies who mine precious metals and rough diamonds, covers the period from 2016 to 2018 and focuses on key aspects of sustainable development, including investments in social programs and environmental protection measures, energy and water consumption, greenhouse gas emissions, and the number of female employees. In conducting the report PwC analyzed the major rough diamond producers by volume as well as leading international gold mining companies in accordance with GRI reporting standards.

Each year, ALROSA allocates 3% of its revenue to social expenses and remains the absolute industry leader by this indicator. In 2018, the company allocated almost $168 million for social investments, including regional development programs, corporate social programs for employees and their families, as well as about 500 social and charitable projects (comparative tables for other companies in the industry are attached). Alrosa's expenditures on environmental activities exceeded $76 million in 2018, which amounted to 2.2% of the company’s consolidated revenue. The company said thata it strives to minimize its environmental impact and is responsible for a wide range of measures, including investments in treatment facilities, land reclamation, financing of environmental studies, monitoring and other initiatives.

According to a PwC research, Alrosa employs the highest percentage of women among the companies analyzed – 34% of the total number of employees. In terms of environmental resources, the study shows that Alrosa is also significantly ahead of other companies in terms of the share of recycled water supply and reused water in production processes, which currently accounts for over 90% of the total water intake. The miner continues to reduce greenhouse gas emissions every year, and gradually upgrades its mining and passenger transport, converting it from diesel and gasoline engines to gas ones. As a result, their greenhouse gas emissions in the CO2 equivalent have been reduced by half over the past five years. In 2016-2018, ALROSA significantly reduced the share of carbon-intensive fuels in total energy consumption. Thus, the amount of coal consumed decreased by 80%, diesel fuel - by almost 90%, and crude oil - by half. Moreover, the share of renewable energy exceeds 90% in the total amount of energy consumption.

"ALROSA is a company of regional significance in Yakutia, with about 50,000 people living in our monotowns today," said Sergey Ivanov, CEO of Alrosa. "Therefore, social responsibility is our top priority and we continue to be one of the leaders in this area. We also contribute to the social and economic development of the Arkhangelsk region, where our subsidiary Severalmaz operates. Our social investments in 2018 amounted to almost $168 million. Separately, the company finances environmental projects, for which we allocated over $76 million. These results achieved by ALROSA last year were made possible thanks to the efforts of all the company's employees." Maria Gordon, Member of the Supervisory Board, Senior Independent Director, Chairman of the Audit Committee, added, "Owing to its city-forming roots, Alrosa has long been a leader in community engagement. In the past few years, the board and the management has strengthened the focus on embedding the best of class HSE practices across all our facilities as we see this as a non-negotiable terms of doing business."